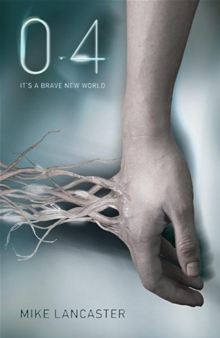 It's a brave new world. 'My name is Kyle Straker. And I don't exist anymore.' So begins the story of Kyle Straker, recorded on to old audio tapes. You might think these tapes are a hoax. But perhaps they contain the history of a past world...If what the tapes say are true, it means that everything we think we know is a lie. And if everything we know is a lie does that mean that we are, too?

This is an e-book that I borrowed from the library.

This was a very quick read. The reader is told at the beginning of the book that the text is transcribed from two audio tapes that have been discovered. The voice on the tape belongs to a teenager named Kyle Straker, a British teenager who is passing the time on his summer vacation with his friends: Simon, his best friend; Lily, Simon’s girlfriend and with whom Kyle has a history; and Danny, who Kyle notes is often the butt of his and Simon’s jokes.

The little village they live in is gearing up for its annual summer talent show. While Kyle has no interest in anything other than watching, their friend Danny tells them that he has successfully hypnotized his sister and, despite the skepticism of his friends, plans to do it at the talent show.

This is where things get very strange. I really don’t want to spoil it, so I will say that Kyle, Lily, and two others volunteer to e hypnotized by Danny during the talent show, and when they wake up, their entire world has changed.

I was initially a little freaked out by what had happened when Kyle and the others came to. It was one of those sci-fi things that, when I tried to imagine myself in that world, gave me the creeps. But it makes for a good book! The rest of the  book is about Kyle and the others trying to figure out what happened to everyone, and it was not what I thought it would be.

I don’t read much sci-fi, and I really liked the ideas in this book. It was very different from what I usually read, and I thought it was really imaginative. I liked it a lot. I also liked the idea of the book coming from the tapes Kyle recorded. It made me wonder where and when he recorded them, why he had to make sure to do that.

I also enjoyed the way the person transcribing the tapes would occasionally interject notes on the text, providing explanations for things that Kyle mentions such as reality television and Teletubbies. While humorous, this also indicated that whoever was transcribing the tapes was from a future time period and Kyle’s narrative was from a past time. It also became apparent that, in this future, Kyle’s tapes (known as ‘The Straker Tapes’) were a subject of much academic research and discussion.

The one thing that I felt was a bit lacking in the book was that I didn’t really feel like I knew any of the characters. Kyle told us a bit about his family and his past with Lily, but I didn’t feel as though I actually learned much, if anything, about the rest of the characters, which was a bit disappointing.

Overall, though, this was a fun read. There is a sequel, 1.4, which I would really like to read. It’s available at my library (not in e-book format, unfortunately), and I will definitely be placing my name on the hold list for that one! If you like science fiction, I recommend this book.