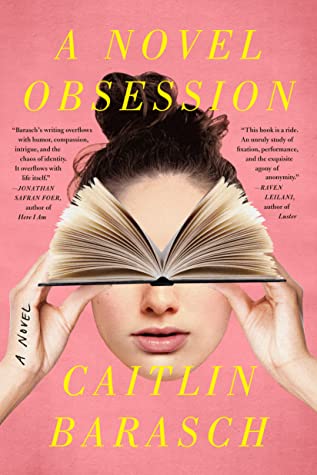 A Novel Obsession By Caitlin Barasch

A wry and bold debut novel, which is at once an irresistible catastrophe waiting to happen and an unflinching exploration of how we narrate the stories of our lives, as an aspiring novelist finds herself stalking—and writing about—her boyfriend’s ex-girlfriend.

“I can’t help but compare our worth as writers, as lovers, as women. Is anything solely mine, or will I always dwell in someone else’s shadow?”

Twenty-four-year-old bookseller and New Yorker Naomi Ackerman, desperate to write a novel, struggles to find the right story to tell. When, after years of disastrous Tinder dates, she meets Caleb—a perfectly nice guy with a Welsh accent and a unique patience for all of her quirks—she feels she's finally stumbled onto a time-honored subject: love. But then Caleb's ex-girlfriend, Rosemary, enters the scene.

When Naomi learns that Rosemary is not safely tucked away overseas as she'd assumed but in fact lives in New York and works in the literary world, she is fundamentally threatened and intrigued in equal measure. On paper, Rosemary sounds like a better version of Naomi—but if they both fell for the same man, they must have something more essential in common.

Determined to figure out how their stories intertwine, Naomi's casual Instagram stalking morphs into a full-blown friendship under false pretenses. She can't seem to get herself to quit Rosemary, in whom she discovers an unexpected confidant—and she can't stop writing about her either, having now found a more interesting subject for her nascent novel. As her lies and half-truths spiral out of her control, and fact and fiction become increasingly difficult to separate, Naomi manipulates the most important people in her life—her family, her friends, Caleb, Rosemary, and, perhaps most devastatingly, herself—in pursuit of her craft. Ultimately, she’s forced to decide who and what she's willing to sacrifice to write them all the perfect ending.

I loved this book! Reading Naomi’s story was like watching someone go through a downward spiral that you’re powerless to stop. It was such an intriguing, sharp, consuming story, and as I got closer to the end, the tension kept building.

This was one of those stories where it doesn’t initially seem like much is really happening, plot-wise, but it was such a fascinating character study that I couldn’t stop reading. The literary backdrop was a bonus for me too, since I love books about books / the book world.

This is not necessarily something I would call a psychological thriller, but Naomi’s growing obsession and lies she has to tell to keep it going creates so much tension that I really couldn’t put it down. So maybe there is something of a thriller to it, but not in the way I was expecting. This was Caitlin Barasch’s debut novel, and I’m eager to see what she writes next!