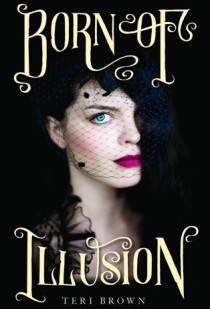 This book was one I’d been wanting to read for a while, and after I finished reading Tampa by Alissa Nutting, I was in the mood for something lighter and fun! This seemed like just the thing.

I finished this book right before I went on vacation at the beginning of September, so trying to write my review now is a bit tricky because vacation brain sort of took over and I feel like I’m not remembering the things I wanted to say about this book. But I’ll do my best.

Anna Van Housen helps her medium mother Margeurite do stage shows and seances in 1920s New York. Possibly Houdini’s daughter, she can sense feelings and see the future. Frightening visions show her mother in peril. New downstairs neighbor Cole introduces her to a society that studies people with gifts like hers. Sorting truth from illusion yields her destiny.

I loved the setting – 1920s in New York City! It was so fun. And I loved the magic, mystical aspect of this story.

Anna is a very likable, sympathetic character, who has a complicated relationship with her mother. Her mother seemed jealous of Anna’s abilities, and although she used them in their show, it seemed clear that Anna’s mother wanted to be the star – even though Anna had real skills, real magic. It was a bit heartbreaking at times.

There is also the question of whether or not Houdini is really Anna’s father. Her mother has always told her that he is, but Anna has her doubts. When he appears in town for a show and a book signing, Anna can’t resist trying to go see him – despite his very well-known dislike for mediums like Anna’s mother. I quite enjoyed the scenes with Houdini. He didn’t appear often in the book but it felt like his persona was always looming in the background of Anna’s life.

There is also a tiny love triangle, between Cole (the mysterious downstairs neighbour who seems to know something about Anna’s abilities) and Owen (the nephew of their agent, who is fun and outgoing). I didn’t think this was much of a triangle, since it seemed obvious to me who Anna’s real feelings were for, but I enjoyed the tension between Owen and Cole throughout the book! Cole also provided some intriguing information about other people with abilities similar to Anna’s, and I would love to learn more about that!

The cover says this is book #1 in a series. I’m not sure when the sequel will come out, but I know I want to read it! This was a really fun, entertaining book. I loved the setting, the time period, and the characters. I definitely recommend this for fans of YA historical fiction.