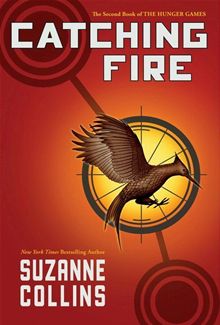 Published by Scholastic Press on September 1, 2009

Against all odds, Katniss has won the Hunger Games. She and fellow District 12 tribute Peeta Mellark are miraculously still alive. Katniss should be relieved, happy even. After all, she has returned to her family and her longtime friend, Gale. Yet nothing is the way Katniss wishes it to be. Gale holds her at an icy distance. Peeta has turned his back on her completely. And there are whispers of a rebellion against the Capitol - a rebellion that Katniss and Peeta may have helped create.

Much to her shock, Katniss has fueled an unrest she's afraid she cannot stop. And what scares her even more is that she's not entirely convinced she should try. As time draws near for Katniss and Peeta to visit the districts on the Capitol's cruel Victory Tour, the stakes are higher than ever. If they can't prove, without a shadow of a doubt, that they are lost in their love for each other, the consequences will be horrifying.

In Catching Fire, the second novel in the Hunger Games trilogy, Suzanne Collins continues the story of Katniss Everdeen, testing her more than ever before...and surprising readers at every turn.

This is the second book in the Hunger Games series. I loved the first book, and this one picks up not long after the end of The Hunger Games.

Where the first book focused mostly on the Games, in this one we learn a lot about the Capitol and President Snow, who now seems to have a personal vendetta against Katniss. There are rumours of uprisings in various districts, and it soon becomes clear that people all over Panem are looking to Katniss as someone who can defy the Capitol and its often brutal rule.

Katniss and Peeta are now living with their families in the Victor’s Village, with their mentor Haymitch. Katniss’s life has changed dramatically since winning the Games, but she and Peeta are haunted by nightmares of their experiences in the Arena. Their relationship seems to have cooled as well, and Katniss is confused about what her real feelings for Peeta are. Things with Gale have similarly become complicated.

Add to that the new Peacekeepers in District 12 who are much more strict and enfore the rules more than the previous ones, and Katniss is left wondering if things were better before the Games. When you throw in a visit from President Snow to Katniss in the Victor’s Village, it seems clear that the Capitol is not pleased with her and the way she won the games – they see her as a defiant trouble-maker, and someone like that doesn’t seem to last long in the Districts.

There are rumblings of uprisings though, and Katniss begins to wonder if they can make one happen in District 12. However, when Gale is punished by the new Head Peacekeeper, and the President threatens her, she realizes it may be too late and the best way to keep the people that she loves safe is to go along with the Victory Tour, where she and Peeta will tour each district, and act like the happy young lovers that won the Games.

Beyond that, I don’t want to give away too much. You really should just read this book (after reading The Hunger Games, of course). There is a Quarter Quell, meaning that this year marks the 75th Hunger Games, and at each Quarter Quell, the Gamesmakers have something extra-special planned. This was something that somehow I didn’t see coming and I don’t want to give it away.

This book ended with a major cliffhanger, and I’m so glad I’ve waited until now to read these books because it means I don’t have to wait for the final book in the series, Mockingjay, to be released – I can just purchase it from the Kobo store!

Do yourself a favour and read these books! I definitely recommend this series. They’re so good that  you won’t be able to put them down, so they won’t take long for you to read! Now on to Mockingjay!