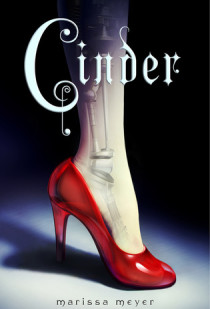 I’ve heard so many good things about this book, and knew I had to read it at some point. Well, I finally picked up a copy from Chapters and could barely put the book down! Here is the summary from Goodreads:

Humans and androids crowd the raucous streets of New Beijing. A deadly plague ravages the population. From space, a ruthless lunar people watch, waiting to make their move. No one knows that Earth’s fate hinges on one girl. . . .

Cinder, a gifted mechanic, is a cyborg. She’s a second-class citizen with a mysterious past, reviled by her stepmother and blamed for her stepsister’s illness. But when her life becomes intertwined with the handsome Prince Kai’s, she suddenly finds herself at the center of an intergalactic struggle, and a forbidden attraction. Caught between duty and freedom, loyalty and betrayal, she must uncover secrets about her past in order to protect her world’s future.

I’m so glad I finally read this one! I was sucked into the story right away. As I recently read another variation on the Cinderella tale, Shadows on the Moon, I was very curious about this cyborg-futuristic version.

Linh Cinder is a cyborg, living in New Beijing with her stepmother and legal guardian, Adri, and her two daughters. While working her mechanic stand in the market, Cinder meets the handsome Prince Kai. She falls for him, and he seems to be falling for her too. When one of Cinder’s step-sisters comes down with an illness that has plagued the Earth,  Adri volunteers Cinder for medical testing being conducted on cyborgs in a search for the cure. This leads Cinder to discover all sorts of things about herself, her abilities, and her past, and tests her relationship with the prince.

I loved the setting of this book, which takes place in the future after World War IV, which has led to a reorganization of borders and political affiliations. There hasn’t been a war on Earth in years, but the threat of war still looms over everyone – literally, since Levana, queen of the Lunars, has her sights set on Earth. The Lunars were apparently once humans who colonized the moon, but now have some magical abilities (technically not magic, but an ability involving bioelectricity). For fear of spoilers, I won’t say any more about the plot, but I loved the way Meyer wove everything together and had me interested in all of it, from the blossoming romance between Cinder and Prince Kai to intergalactic politics.

Cinder was such a likeable, sympathetic character and I felt for her every time she was embarrassed or insulted by Adri. As a cyborg, she was looked down on by people, especially Adri, who treated her as though she were inhuman. I also loved Iko, the family’s android, who is also Cinder’s friend. Iko was adorable and funny and just all around great.

I also felt for Prince Kai, who was under such pressure politically, and was perhaps torn between wanting to follow his heart and do what was best for the people. Cinder also feared Kai discovering that she was cyborg, and so their romance was tentative, as she wanted to tell him the truth but was afraid of how he would react.

There were definitely some plot twists and turns here, and clearly a larger story is unfolding, as this is the first book in a series,  the Lunar Chronicles series. I definitely recommend this book – it kept me reading past my bedtime and had me entertained all the way through.

I already have the sequel, Scarlet, on my bookshelf and I can’t wait to read it!