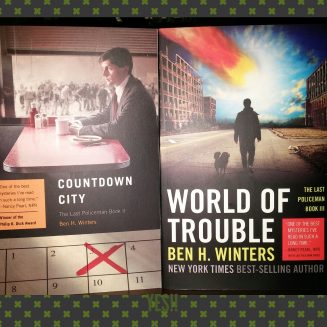 Cover images and summaries from Goodreads:

There are just 77 days to go before a deadly asteroid collides with Earth, and Detective Hank Palace is out of a job. With the Concord police force operating under the auspices of the U.S. Justice Department, Hank's days of solving crimes are over...until a woman from his past begs for help finding her missing husband.

Brett Cavatone disappeared without a trace – an easy feat in a world with no phones, no cars, and no way to tell whether someone’s gone “bucket list” or just gone. With society falling to shambles, Hank pieces together what few clues he can, on a search that leads him from a college-campus-turned-anarchist-encampment to a crumbling coastal landscape where anti-immigrant militia fend off “impact zone” refugees.

The second novel in the critically acclaimed Last Policeman trilogy, Countdown City presents a fascinating mystery set on brink of an apocalypse – and once again, Hank Palace confronts questions way beyond "whodunit." What do we as human beings owe to one another? And what does it mean to be civilized when civilization is collapsing all around you?

There are just 14 days until a deadly asteroid hits the planet, and America has fallen into chaos. Citizens have barricaded themselves inside basements, emergency shelters, and big-box retail stores. Cash is worthless; bottled water is valuable beyond measure. All over the world, everyone is bracing for the end.

But Detective Hank Palace still has one last case to solve. His beloved sister Nico was last seen in the company of suspicious radicals, armed with heavy artillery and a plan to save humanity. Hank's search for Nico takes him from Massachusetts to Ohio, from abandoned zoos and fast food restaurants to a deserted police station where he uncovers evidence of a brutal crime. With time running out, Hank follows the clues to a series of earth-shattering revelations.

The third novel in the Last Policeman trilogy, World of Trouble presents one final pre-apocalyptic mystery – and Hank Palace confronts questions way beyond whodunit: How far would you go to protect a loved one? And how would you choose to spend your last days on Earth?

I very rarely read books in a series back to back. Normally, as much as I like a book, I want to read something else, jump into another book’s world. There are simply too many books to read and not enough time!

But after finishing Countdown City, book two in the trilogy, I immediately started to read World of Trouble, the last book, and finished it that same day. I’ve decided to write a review for the two books at the same time because reading them so close together has made it difficult to separate my feelings for each book.

Both books were excellent! Both were good mysteries (although I think the mystery in World of Trouble was much stronger, for reasons that I don’t want to spoil), and the writing was great.

What I really loved about both of these books was the protagonist, former Det. Hank Palace (and his relationship with his adorable dog, Houdini). Despite the world going to pieces around him, he does what he does – helps people, solving murders and disappearances in a world full of people going “Bucket List” and taking off, a world becoming increasingly dangerous and violent as the countdown to the asteroid’s arrival continues.

I know I’ve said numerous times on this blog that no matter how much I love a book or how emotionally connected I am to a story and its characters, I very rarely cry, BUT I was nearly moved to tears when I finished reading World of Trouble. And I’m still thinking about it, and about Hank (and Houdini), and I’m definitely having a book hangover. I can’t really get into anything else I’m trying to read now.

I highly recommend this series, which has become a new favourite. They aren’t just great mysteries; they’re riveting stories that kept me thinking “what if” (which I love), and wondering what I might do if everything was about to change and, more than likely, end in six months’/weeks’/days’ time.

I have fallen in love with this series, and will be recommending it to everyone! These are definitely the books I’ll be trying to push on people all year!