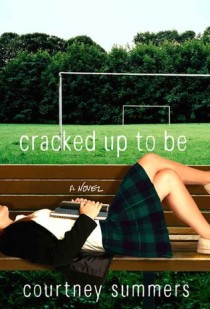 I read this as part of the Courtney Summers Read-Along hosted by Ciara at Lost at Midnight Reviews. Before this, I’d read This Is Not A Test, which I loved, so I was eager to read more of her books!

When “Perfect” Parker Fadley starts drinking at school and failing her classes, all of St. Peter’s High goes on alert. How has the cheerleading captain, girlfriend of the most popular guy in school, consummate teacher’s pet, and future valedictorian fallen so far from grace?

Parker doesn’t want to talk about it. She’d just like to be left alone, to disappear, to be ignored. But her parents have placed her on suicide watch and her conselors are demanding the truth. Worse, there’s a nice guy falling in love with her and he’s making her feel things again when she’d really rather not be feeling anything at all.

Nobody would have guessed she’d turn out like this. But nobody knows the truth.

Something horrible has happened, and it just might be her fault.

Parker Fadley used to be pretty perfect. She was popular, head cheerleader, and dating the most popular guy in her school. But something happened and now Parker is so different from the person everyone thinks she was. I was drawn into this story immediately, eager to know what had happened to Parker to make her push everyone away.

Parker was really trying to be unlikeable, to make sure that people would leave her alone. She wanted to disappear. She was snide, sarcastic, drinking and getting in trouble at school, and downright cruel at times to her former friends and her parents. She had to follow strict rules at school if she hoped to graduate at the end of the year, but was always looking for ways to get around them. And yet, despite her bad attitude and the awful way she treated people, I liked Parker. She made me laugh at times. She was obviously going through something and I wanted to know what it was. I tried to guess, but I was nowhere near correct. And once I learned the truth, I could totally understand why it messed Parker up.

This is a book that you won’t want to put down. It’s very character-driven, and there were so many people in Parker’s life who, despite her best intentions, would not leave her alone. Reading about her parents refusing to give up on her really got to me. And Parker’s ex-boyfriend and Jake, the new guy in school, wouldn’t turn their backs on her either. (PS I love Jake!) Then there was Becky, who seemed to benefit from Parker’s fall down the social ladder, as a former friend and rival of Parker’s. Each of these characters felt real, and I loved the dialogue in this book. Courtney Summers really has a way with words!

I really enjoyed this book. It totally pulled at my heartstrings, and despite the hardships Parker went through, it ended optimistically. I believe this is Courtney Summers’ first book, and if that’s true, I’m impressed! This is a tight, polished book with a main character that I connected to right away. I’m definitely looking forward to the rest of the read along!