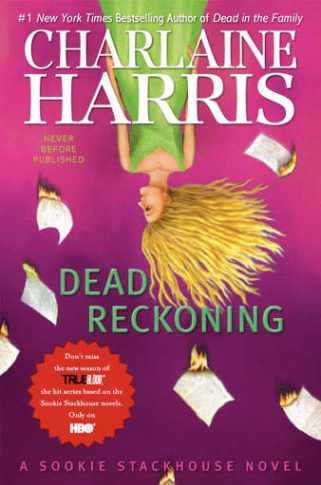 With her knack for being in trouble's way, Sookie witnesses the firebombing of Merlotte's, the bar where she works. Since Sam Merlotte is now known to be two-natured, suspicion falls immediately on the anti-shifters in the area. Sookie suspects otherwise, but her attention is divided when she realizes that her lover Eric Northman and his "child" Pam are plotting to kill the vampire who is now their master. Gradually, Sookie is drawn into the plot-which is much more complicated than she knows...

This is the eleventh book in Charlaine Harris’s Southern Vampire Mysteries series, on which the HBO series True Blood is based. Before I give the novel’s summary, if you aren’t already familiar with this series, it is about a young woman named Sookie Stackhouse who lives in a small town named Bon Temps, in Louisiana, where she works as a waitress at Merlotte’s, the local bar. Sookie is a telepath; that is, she is able to read the minds of other people. At the beginning of the series, she lives with her Gran, as her parents are both dead, and her brother Jason, a ladies man, lives in town as well.

Some time prior to the beginning of the novels, vampires have made their presence known and the world is slowly figuring out how to deal with and accept this revelation. Throughout the series, the existence of other supernatural creatures, such as werewolves and shape-shifters, is revealed.

I liked this book. I enjoy this series as a whole. I like the universe Charlaine Harris has created, with its vampire (and other supernatural) background and mythology.

I also like Sookie. She is always trying to do the right thing, despite the chaos that surrounds her, and I think the author has done a good job, over the course of eleven books, of developing Sookie’s character and gradually presenting explanations for the things that keep happening to her.

As for what I liked about this book specifically, I liked that it reintroduced some characters from previous novels, albeit briefly, such as Alcide Herveaux, Amelia and Bob, and Mr. Cataliades. I also like the love triangle that seems to always exist in some way between Sookie and Bill Compton, the vampire who was her first love, and Eric Northman, a high-ranking vampire who is Sookie’s current beau. Personally, I believe that Sookie should be with Bill, and I’m holding out hope that Charlaine Harris will get them back together!

This book, as with all of the others in the series, is a fun, quick read, with enough vampire battles and action scenes thrown in for excitement. There are some love scenes that are more graphic than I would like but it’s a small gripe, and I’m probably in the minority to complain about that!

I liked the story line. I enjoy reading about the vampire politics and lore, much more than the werewolf and fairy and wiccan cultures, and this book was a return to the vampire-based stories.

There are continued plot lines from previous books, so while I do recommend this book, you should definitely start with book one, Dead Until Dark, if you’re new to the series.