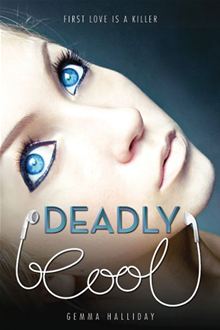 Hartley Grace Featherstone is having a very bad day. First she finds out that her boyfriend is cheating on her with the president of the Herbert Hoover High School Chastity Club. Then he’s pegged as the #1 suspect in a murder. And if that weren’t enough, now he’s depending on Hartley to clear his name.

But as much as Hartley wouldn’t mind seeing him squirm, she knows he’s innocent, and she’s the only one who can help him. Along with her best friend, Sam, and the school’s resident Bad Boy, Chase, Hartley starts investigating on her own. But as the dead bodies begin to pile up, the mystery deepens, the suspects multiply, and Hartley begins to fear that she may be the killer’s next victim.

This was a really fun, quick read. It starts with Hartley poking around in her boyfriend Josh’s locker, and discovering an empty condom wrapper. Since she hasn’t had sex with Josh, she sees that there may be truth to the rumour that he cheated on her with Courtney, the president of her high school’s chastity club. When Hartley and her best friend Sam head over to Josh’s house to confront him, they discover Courtney, dead in Josh’s bedroom closet. Of course, Josh swears he didn’t do it – and despite the fact that he’s a lying cheater, Hartley believes him, and sets out to discover the true killer’s identity.

The book is narrated by Hartley, which I think is what really made this book work for me, because Hartley is sarcastic, funny, and totally relatable. While not an outcast, she’s also not one of the popular girls, and she has the same insecurities that most of us did in high school. I also liked that, while she wanted to help Josh because she felt that he was innocent of Courtney’s murder, she dumped him for cheating on her. I don’t like cheaters, so I was mentally telling her, Kick him to the curb! When she did, even though she still cared for him and wanted to help him, I was happy that she didn’t accept his excuses or apologies and take him back.

The mystery was fairly well-plotted out, even if the killer’s identity was a bit predictable, but it was fun reading about Hartley turn into a detective. She wasn’t perfect – she fumbled a bit and definitely wasn’t smooth – but that was part of the fun.

The secondary characters – Hartley’s BFF Sam; Chase, the cute guy from the school paper who helps with the investigation; and Hartley’s super healthy, occasionally over-bearing mom – were fun and fit in nicely to the story and with Hartley’s character.

There is definitely a lot of humour in this book. Despite the murder investigation, it isn’t a very dark book, so if you’re interested in something fun with a mystery and hilarious narrator to boot, I recommend this one. I’ll be reading the follow up, Social Suicide, for sure.