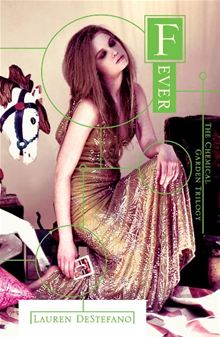 Running away brings Rhine and Gabriel right into a trap, in the form of a twisted carnival whose ringmistress keeps watch over a menagerie of girls. Just as Rhine uncovers what plans await her, her fortune turns again. With Gabriel at her side, Rhine travels through an environment as grim as the one she left a year ago - surroundings that mirror her own feelings of fear and hopelessness.

The two are determined to get to Manhattan, to relative safety with Rhine’s twin brother, Rowan. But the road there is long and perilous - and in a world where young women only live to age twenty and young men die at twenty-five, time is precious. Worse still, they can’t seem to elude Rhine’s father-in-law, Vaughn, who is determined to bring Rhine back to the mansion...by any means necessary.

In the sequel to Lauren DeStefano’s harrowing Wither, Rhine must decide if freedom is worth the price - now that she has more to lose than ever.

This is the second book in Lauren DeStefano’s Chemical Garden trilogy, after Wither.

Before I say anything about the book itself, I think we can all agree that the cover of this book looks a bit silly, can’t we?

At the end of Wither, Rhine escaped the mansion and her marriage to Linden, bringing Gabriel, one of the attendants, with her. They set out to find her brother, Rowan, which means they must return to Rhine’s home in Manhattan.

Before they get there, though, they are captured by ‘Madame’ and brought to a scarlet district where the girls are prostitutes in Madame’s ‘circus’. They live in tents and are on drugs, keeping them easily under Madame’s control. Eventually, they escape, and make their way to Manhattan, only to find Rowan gone and their home burned. Rhine struggles to accept the idea that her brother believes her dead and has moved on.

I don’t want to talk about the plot too much, because if you read and liked Wither, you’ll want to read this and I’d rather not spoil anything. Instead, I’ll talk about what I liked about this novel. I liked the creepy, dark atmosphere. DeStefano does a good job of making the reader understand that Rhine and Gabriel are not safe anywhere, now that they’ve escaped from Vaughan and his mansion.  I also liked that they didn’t stay in one place too long – when they first arrived at Madame’s circus, I thought that’s where the bulk of the novel would be set, but after their escape, they moved around, staying in a few different places. No matter where they went, there was always some threat or danger making them move on, particularly at the end of the novel, which took a bit of a turn that I didn’t see coming.

I liked a lot of the secondary characters that were introduced as well: Maddie, Lilac, Grace, Annabelle – they all had sad backstories and provided some depth to the story, and even Madame, who is not a character that I think anyone could like, was interesting.

I didn’t like that Gabriel’s character was not more developed. I didn’t feel the romance between he and Rhine -I didn’t quite get a sense of the love that was so strong it was worth risking their lives for, even though that’s exactly what they did when they escaped the mansion. His character didn’t seem to serve much purpose beyond a plot device – someone for Rhine to worry about, or someone to beat up anyone who laid a finger on Rhine. He just came across as bland, blank, boring – I didn’t get any sense of personality. Hopefully that changes in the next, final installment of the series.

The final part of the book sheds some light on the medical mystery aspect that was more prevalent in Wither, and I’m really looking forward to more of that (hopefully) in the next book. I was also pleased to have Linden, Cecily, and Deirdre brought back into the story.

So overall, while I thought this book stumbled at times, I enjoyed it, and would recommend it if you enjoyed Wither.