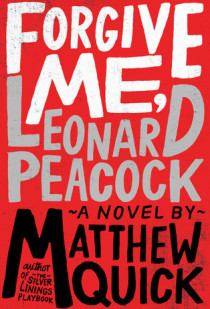 In addition to the P-38, there are four gifts, one for each of my friends. I want to say good-bye to them properly. I want to give them each something to remember me by. To let them know I really cared about them and I’m sorry I couldn’t be more than I was—that I couldn’t stick around—and that what’s going to happen today isn’t their fault.

Today is Leonard Peacock’s birthday. It is also the day he hides a gun in his backpack. Because today is the day he will kill his former best friend, and then himself, with his grandfather’s P-38 pistol.

But first he must say good-bye to the four people who matter most to him: his Humphrey Bogart-obsessed next-door neighbor, Walt; his classmate Baback, a violin virtuoso; Lauren, the Christian homeschooler he has a crush on; and Herr Silverman, who teaches the high school’s class on the Holocaust. Speaking to each in turn, Leonard slowly reveals his secrets as the hours tick by and the moment of truth approaches.

In this riveting book, acclaimed author Matthew Quick unflinchingly examines the impossible choices that must be made—and the light in us all that never goes out.

This is my first Matthew Quick read. I did borrow The Silver Linings Playbook from the library, but didn’t get around to reading it before it was due back (although I did see the movie, and thought it was fantastic).

From the outset, the reader is aware of Leonard’s plan to kill his former best friend Asher, and then kill himself. First, though, he has four gifts he wants to deliver to four people who are important to him. I was, of course, intrigued, wanting to know what had happened between Leonard and Asher, as well as what sort of gifts he was planning to give to these other people.

Something about this book and Leonard’s narration reminded me of Holden Caulfield and Catcher in the Rye. Admittedly, I haven’t read Catcher in the Rye in about a decade (certainly due for a re-read) so I could be way off on that, but the way Leonard kept talking about his classmates as faking things, hiding their heads in the sand, being wilfully blind to or ignorant of things going in the their school, in the world – it reminded me of Holden and his talk of ‘phonies’. Leonard was, like Holden (or at least, the way I remember Holden), obnoxious, thought he was above or better than or just too different from everyone else, that he had a unique outlook on things.

However, the more I learned about Leonard and his life, the more my heart broke for him. I felt helpless to do anything other than read on, hoping that he would change his mind and decide not to go through with his terrible plan. This is one of those stories that really got to me because I didn’t have an easy time in high school (although not in the way that Leonard did) and I just wanted Leonard to know that life really could change and get better after high school. Once you’re out of there, you can go anywhere, try to do anything, be anyone – high school is honestly just a blip in your life, and I’m glad I didn’t let any of my experiences affect me permanently (at least I hope I haven’t!). (Don’t get me wrong, I also had some really great times in high school but I think most of us know it can kind of be the best and the worst)

Leonard’s elderly neighbour Walt, with whom he watched old Bogart movies, and his teacher Herr Silverman really stood out for me in this book. They were fascinating characters. I loved reading about them, and I loved their interactions with Leonard.

This was the kind of book that I just couldn’t put down. I read it until the absolute last second of my lunch hour, wanting to see how things were going to end. A recommended read for those interested in a gritty contemporary YA story.