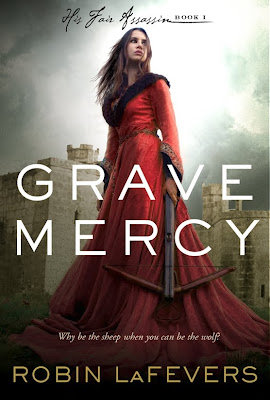 Why be the sheep, when you can be the wolf?

Seventeen-year-old Ismae escapes from the brutality of an arranged marriage into the sanctuary of the convent of St. Mortain, where the sisters still serve the gods of old. Here she learns that the god of Death Himself has blessed her with dangerous gifts—and a violent destiny. If she chooses to stay at the convent, she will be trained as an assassin and serve as a handmaiden to Death. To claim her new life, she must destroy the lives of others.

Ismae’s most important assignment takes her straight into the high court of Brittany—where she finds herself woefully under prepared—not only for the deadly games of intrigue and treason, but for the impossible choices she must make. For how can she deliver Death’s vengeance upon a target who, against her will, has stolen her heart?

This is the first in a series called His Fair Assassin, with the second book coming out sometime in 2013. I tried to read this book and couldn’t get past the first page – I’m not sure why. I just wasn’t feeling it. However, a few weeks later, I decided to try reading it again, and I’m so glad I did, because I ended up really liking it.

I love historical fiction, and the historical setting provides such a great backdrop for this book. It’s set during the late 15th century, when Anne of Brittany is facing the dangers of French invasion while trying to keep Brittany independent, as well as a number of suitors wanting to arrange marriage (see the author’s website for more on the historical background). This sets up a lot of political drama and intrigue for the story.

Ismae is rescued from a terrible arranged marriage early on, and sent to the convent of St. Mortain. She learns that she has certain abilities and has been fathered by the god of Death. She is offered an opportunity to learn the ways they women and girls in the convent serve Death, and she accepts. We aren’t given too much information on her background, but it’s made clear that her life sort of sucked, and that Ismae has been an outsider her whole life. When she reaches the convent, she finally feels like she’s accepted and belongs.

One reason for Ismae’s trouble is a scar on her back, which is the result of her mother taking some sort of potion from the village herbwitch to try and end the pregnancy. Ismae survived, however, and bears the awful scar on her back. She is embarassed and ashamed of it, and refuses to let anyone, even the women of the convent, see it.

Ismae’s training in the convent is very interesting. The girls are young, and learn about weapons, poisons, combat, and coquetry. She meets and befriends two very different girls: Annith, who is young and obedient, and has been at the convent for some time; and Sybella, who may be a bit mad and wild, and who is not afraid to challenge the authority of the convent.

Ismae is sent out on two assignments, in which she must assassinate men who have been marked for death by St. Mortain, the god of Death. Ismae does not have any ethical dilemmas when it comes to killing these men: she serves her god, and does His bidding. It is not to her to question what these men have done to have been marked for death. Things get complicated when she is given her third assignment (after which she may take her vows), to attend at court with Gavriel Duval, one of Anne’s advisors, and assassinate a traitor. They do not yet know who the traitor is, and Ismae must spend a lot of time with Gavriel while they try to discover who it may be. Of course, what ensues is a struggle between her duties to her convent and her god, and her emerging feelings for Gavriel.

I won’t give away any more of the plot, because I really think you should read it for yourself. The writing is very well done – the story is paced just right, and I didn’t even roll my eyes at the romance. I really liked the way the author allowed the plot and events to unfold, nicely balancing the action, romance, and political intrigue.

I read Kimberly’s review at Stacked, and I agree so much with everything she said about liking the fact that Ismae actually kills people in this book. Ismae is excited and eager to do this in order to serve her god, and it was refreshing to read. Ismae is tough and brave, and I liked her so much.

I felt that there were a couple of things left unresolved at the end, but as I said, this is the first book in a series, and so I expect some answers in the second book, which I will definitely be reading. If you are a fan of YA and/or historical fiction, I definitely recommend this.