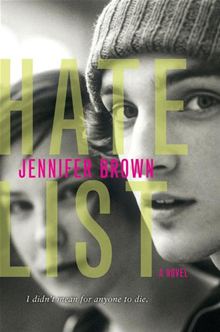 Published by Little, Brown Books for Young Readers on September 1, 2009

Five months ago, Valerie Leftman's boyfriend, Nick, opened fire on their school cafeteria. Shot trying to stop him, Valerie inadvertently saved the life of a classmate, but was implicated in the shootings because of the list she helped create. A list of people and things she and Nick hated. The list he used to pick his targets.

Now, after a summer of seclusion, Val is forced to confront her guilt as she returns to school to complete her senior year. Haunted by the memory of the boyfriend she still loves and navigating rocky relationships with her family, former friends and the girl whose life she saved, Val must come to grips with the tragedy that took place and her role in it, in order to make amends and move on with her life.

I’ve been wanting to read this one for some time, and borrowed the e-book from the library (I’m on a roll with library books!).

I ended up reading this in one sitting (so much for my fear of not finishing my library books before the due date!). The story alternates between the day that Valerie’s boyfriend, Nick, shot a number of fellow students and then himself, and Valerie’s return to school months later.

I really connected with Valerie. She was so confused and angry and sad, and I couldn’t blame her. She and Nick, along with their group of friends, were picked on by the popular kids at school. Her parents argued all the time. She felt safe and happy with Nick, and then he shot a bunch of students, shot her, and then killed himself, and people believed she helped him plan it. Her life was thrown into such turmoil.

At the root of it all was Nick and Val’s Hate List, a list she kept in a notebook with the names of everyone and everything they hated, from homework to celebrities to the BSRB’s- blonde skinny rich bitches to her parents, who argued constantly. Many of the students Nick shot were on the Hate List, so you can see why the police, media, and classmates would think Val knew what Nick was going to do.

The thing is, though, she didn’t. Val had no idea that, despite all their talk of death, Nick was serious about it, and this was a major source of her pain. How could she not have seen that he was serious, where she thought they were just talking, saying things but not really meaning them?

After she got out of the hospital, Val began to see a therapist, who became the first person she was able to talk to about the shooting and Nick and her emotions honestly. This is where she could admit that she loved and missed Nick, despite what he did, and wonder if she really was somehow, some way responsible for the shooting.

Mixed in with Val’s struggles to return to school were her memories of Nick, which made him a more developed character in my eyes, rather than just the boy who shot up the school. With Val, Nick was funny, protective, smart, and likeable. And when Val remembered the times that she and Nick were bullied and picked on by other kids, I felt so sad. My heart really went out to Nick, and I too was angry at the kids who tormented him. Seeing Nick through Val’s eyes, I could understand why she cared for him and continued to do so after he died. To her, the Nick she loved was not the Nick who shot everyone, and she struggled with her grief for him, because after all, she also lost someone the day of the shooting.

Val’s return to school was difficult. I could feel her tension and anxiety as she walked into the building on her first day back, and as she realized that her friends ‘before’ might not be her friends now. Her family didn’t help her much, either: her mother, who made no secret of the fact that she didn’t like Nick, didn’t trust Val, and both of her parents may have believed that she helped Nick plan and carry out the shooting. She got along with her younger brother, but her life and the shooting overshadowed his life, and he suffered too, in a different way.

Ultimately, Val had to figure it all out on her own. There were no easy answers, and while her initial instinct was to isolate herself, and keep her head down while she tried to just finish out the school year, she began to realize that not everyone saw her as a villain. Some, including the girl whose life Val saved, saw her as a hero. Val could have a future, could go to college, could overcome this tragedy.

I can’t really say properly how much this book touched me. I was so moved by the way the author portrayed Nick and the students he shot as both victims and perpetrators of hate and violence. As in real life, there was no clear-cut good or bad – people are a mixture. In particular, the scene where Val went to visit Nick’s grave towards the end of the book had me in tears, and let me tell you, that rarely happens when I read a book.

I am about ten years out of high school, but this book brought me right back to that time, when that school was the whole world, and every minor event took on such significance and importance. I remembered the students who, like Val and Nick, were targeted and picked on. I remembered students who, like some of Nick’s victims, were popular and mean. And I remember moving on to university and seeing that the world was so much bigger than one school.