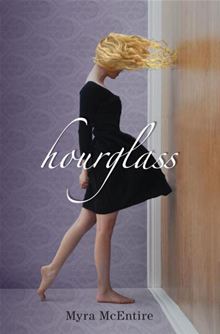 For seventeen-year-old Emerson Cole, life is about seeing what isn't there: swooning Southern Belles; soldiers long forgotten; a haunting jazz trio that vanishes in an instant. Plagued by phantoms since her parents' death, she just wants the apparitions to stop so she can be normal. She's tried everything, but the visions keep coming back.

So when her well-meaning brother brings in a consultant from a secretive organization called the Hourglass, Emerson's willing to try one last cure. But meeting Michael Weaver may not only change her future, it may also change her past.

Who is this dark, mysterious, sympathetic guy, barely older than Emerson herself, who seems to believe every crazy word she says? Why does an electric charge seem to run through the room whenever he's around? And why is he so insistent that he needs her help to prevent a death that never should've happened?

I thought this book was slow at first, but then it seemed to pick up rather quickly and I finished the book in a single sitting.

Emerson’s parents died when she was young, and she now lives with her older brother and his wife. Emerson has spent time at a boarding school, in a mental institution, and has few friends. She is preparing to finish out her final year of high school when she meets Michael Weaver, hired by her brother to ‘help’ Emerson with her problem.

Michael is seemingly another in a string of specialists and consultants brought in by her brother to help Emerson, but the two seem to be instantly drawn to each other. It becomes apparent that Michael knows more than he initially lets on, and as he and Emerson get closer and she begins to get answers to some pressing questions, things become dangerous for everyone (I’m trying to keep this spoiler free!).

Despite the slow start, I enjoyed this book. I liked reading about Emerson’s ability, and I thought she was a great protagonist. She was funny, sarcastic, strong, but also trying to never show vulnerability, and as I learned more about her and her past, I could understand where that was coming from. The losses she experienced in her past made her very close with and protective of her brother, his wife, and her best friend, and I liked each of those characters as well.

I also liked the other characters Emerson encountered through Michael and Hourglass, each with his/her own ability. This is where I felt the book really pick up for me, when she met Kaleb, Cat, Dune, and the others, and saw that she was not alone – there were others who had abilities, some similar to hers, some very different, and she could be part of a community.

There is a romance aspect to the book too. While the main romance in the book is between Emerson and Michael, I liked the little triangle that developed when Kaleb came into the picture. I liked both characters, and could easily see why Emerson was attracted to each of them.

Much of the second half of the story involves the idea of time travel, and as I’ve mentioned before, I love stories involving time travel! The story takes some twists and turns, and was really fun to read. There is another book out in this series, but from the synopsis I read, Emerson is not the main character (although she’s in the book), so I’m looking forward to picking that up.

If you like your YA with some sci-fi thrown in, I recommend this book!