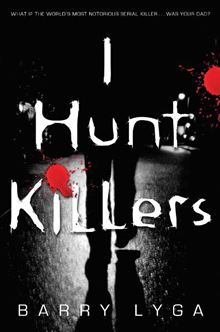 I Hunt Killers By Barry Lyga

Published by Little, Brown and Company on April 3, 2012

Jasper "Jazz" Dent is a likable teenager. A charmer, one might say.

But he's also the son of the world's most infamous serial killer, and for Dear Old Dad, Take Your Son to Work Day was year-round. Jazz has witnessed crime scenes the way cops wish they could—from the criminal's point of view.

And now bodies are piling up in Lobo's Nod.

In an effort to clear his name, Jazz joins the police in a hunt for a new serial killer. But Jazz has a secret—could he be more like his father than anyone knows?

I have really been looking forward to reading this book, and picked it up from the library last night on my way home from work.

I loved this book! I am a big fan of the t.v. show Dexter, so this book seemed right up my alley.

Jazz is 17 years old when our story starts, and a dead body is found in a field in his hometown of Lobo’s Nod. Jazz’s father, Billy Dent, is an infamous serial killer, whose victims number in the triple digits. As a child, Jazz’s father used to take him along when he committed some of his crimes, and as a result, Jazz has a very good understanding of the way a serial killer thinks. Fortunately, Jazz’s father is locked up for the rest of his life, having been caught by the Lobo Nod police.

Jazz now lives with his grandmother (his mother ‘went away’, in Billy’s words, when Jazz was a child), trying to live a normal life as a regular high school student, rather than as the only child of the most notorious serial killer. He spends his time with his girlfriend and with his best friend, Howie.  He occasionally struggles with the woman from child services, who wants to place him in a foster home due to his grandmother’s declining health, but Jazz tries his best to keep up appearances.

When bodies start to pile up in Lobo’s Nod, Jazz is absolutely certain that it’s the work of a serial killer, and that he’s the only one who can outthink the killer. The local police are hesitant to accept Jazz’s theory and offer to help, but as the killings continue and a strange pattern emerges, they turn to Jazz.

What I really liked about this book were Jazz’s examinations of his past and how much he may or may not take after his father. Jazz understands the way his father thinks about people, victims, violence, murder, etc., but he is worried about the fact that he understands. He doesn’t want to be like his father, but he can’t help the way he thinks sometimes. It was sort of a nature vs. nurture internal debate, which I really enjoyed reading and thinking about.

I liked the characters in the book, particularly the town sheriff, who was a sort of father figure to Jazz (and he was the one who caught Jazz’s father), and Howie, the wise-cracking, hemophiliac best friend who accompanies Jazz on excursions to the morgue without so much as batting an eye. Billy’s dad was a fascinating character, and although most of his appearances in the book are via flashback, I think the author created a very charismatic, creepy, terrifying figure.

The plot was intriguing and kept me reading pretty much non-stop, trying to figure out who the killer was. As this is the first in a series (of course – everything seems to be part of a series these days!), the immediate mystery was resolved, but a larger, background mystery was left unsolved, presumably to be further investigated in the sequel, Game, out in April 2013.

SPOILER ALERT – SKIP THIS PARAGRAPH TO AVOID MY SPOILERY SPECULATION: I have my suspicions as to the culprit behind the larger mystery of who was secretly communicating with Billy from the outside and assisted him to escape from jail. My immediate thought was that Howie had something to do with it. In fact, earlier in the book, I thought Howie might have been The Impressionist. Something about a scene where he was bruised and made a crack about a medicine cabinet getting him, and the fact that he was not stabbed but slashed, made me suspicious, particularly when a great deal was made about the fact that he didn’t actually lose that much blood, and that because he was slashed rather than stabbed, there were no characteristics of the weapon that could be identified by the wound, etc. It would be a pretty big betrayal, but that would definitely make for a good plot twist, in my opinion, so if that’s the way it goes, you read it here first! END OF SPOILERS.

Given the subject matter, there is violent imagery throughout the book. There is also some misogyny (maybe even misanthropy), via Jazz’s father, Billy, and Jazz’s examination of Billy’s way of thinking. If you’re interested in reading this book, though, I’m sure you’ve assumed that there will be some violence, and there’s nothing super graphic or horrific here (in my opinion).

This is a definite recommended read, and I absolutely can’t wait to read the sequel! Now if only I didn’t have to wait until next spring to read it.