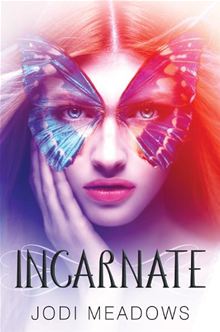 Ana is new. For thousands of years in Range, a million souls have been reincarnated over and over, keeping their memories and experiences from previous lifetimes. When Ana was born, another soul vanished, and no one knows why.

Even Ana’s own mother thinks she’s a nosoul, an omen of worse things to come, and has kept her away from society. To escape her seclusion and learn whether she’ll be reincarnated, Ana travels to the city of Heart, but its citizens are afraid of what her presence means. When dragons and sylph attack the city, is Ana to blame?

Sam believes Ana’s new soul is good and worthwhile. When he stands up for her, their relationship blooms. But can he love someone who may live only once, and will Ana’s enemies—human and creature alike—let them be together? Ana needs to uncover the mistake that gave her someone else’s life, but will her quest threaten the peace of Heart and destroy the promise of reincarnation for all?

This book has been on my radar for a while, and I borrowed a copy from the library this week.

The concept of this book was intriguing, and so different from other books I’ve read. Ana is born into a world where the same souls are reincarnated, over and over. No one dies permanently – the body can die, but the soul will come back eventually in another body – and no new souls ever appear, until Ana. She is born, and another soul seems to have died permanently and doesn’t come back.

I loved this idea – it was fascinating. What if your soul would always come back eventually, no matter what? Would you be reckless, knowing your soul couldn’t die permanently, would you attempt to learn different skills in each life time, or would you try to master a skill over multiple lifetimes?

Ana grew up, raised by her mother Li, far from the other souls. Ana’s early life was characterized by isolation. She was shunned as a child by Li’s friends, and verbally and emotionally, perhaps physically, abused by Li, who didn’t care for her at all, referring to Ana as nosoul, telling her she wasn’t capable of emotions such as love.

Ana decides to journey to Heart, the city, to see if she can learn more about where she came from. Along the way, she meets Sam, who helps her when she’s attacked by sylph. Through Sam, she begins to learn that many of the things Li told her were lies, and that she might be more than just a nosoul. The interesting thing about Sam and Ana’s relationship is that while he is currently in a teenage boy’s body, his soul is actually thousands of years old.

I liked Sam, and the way that he and Ana bonded over music. It was sweet. I kept reminding myself that Ana had grown up without much contact with the outside world, and that the one person who was supposed to raise her was cruel. No surprise, then, that she had such low self-esteem. But with Sam, she was able to develop thicker skin and learn that she is capable of feeling things like love. I really liked Sam. He was caring, clever and I was pleased that there was no love triangle! Hooray!

When they arrive in Heart, most people seemed to look at Ana with suspicion, and some even shunned her. Everyone knew she was the newsoul, but I think after so many centuries of the same souls, Ana was something new and unknown, and that bothered people. The possibility of dying and not coming back was something real. The council allowed Ana to stay in Heart to try and learn more about where she came from, but she had to follow strict rules, and Sam had to be responsible for her. I loved the way Sam stuck up for Ana to the council and other citizens of Heart, and her efforts to learn about how she came to exist was interesting.

Things seemed to be going well for a while, as Ana became friends with some of Sam’s friends, and she learned some skills and trades to help out in the city, but there was a sudden attack on Ana and Sam, causing Ana to think someone is out to get her, to try and prevent her from learning more about where she came from. This, of course, only made me want to know the truth even more!

At times I found the book a bit slow – the book probably could have been a bit shorter – but overall, I enjoyed this book, and it really picked up for me right at the end. Dragons! I haven’t even talked about that yet! I loved the inclusion of dragons and sylph, and I loved the book’s concept. I can’t wait to learn more in the sequel, Asunder.