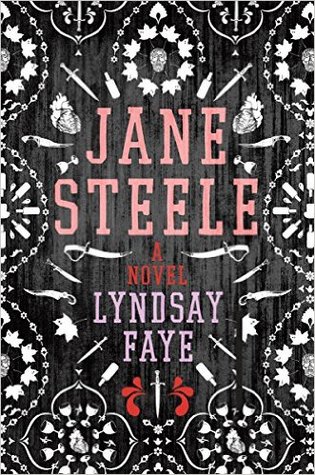 A reimagining of Jane Eyre as a gutsy, heroic serial killer, from the author whose work The New York Times described as “riveting” and The Wall Street Journal called “thrilling.”

“Reader, I murdered him.”

A sensitive orphan, Jane Steele suffers first at the hands of her spiteful aunt and predatory cousin, then at a grim school where she fights for her very life until escaping to London, leaving the corpses of her tormentors behind her. After years of hiding from the law while penning macabre “last confessions” of the recently hanged, Jane thrills at discovering an advertisement.  Her aunt has died and her childhood home has a new master: Mr. Charles Thornfield, who seeks a governess.

Burning to know whether she is in fact the rightful heir, Jane takes the position incognito, and learns that Highgate House is full of marvelously strange new residents—the fascinating but caustic Mr. Thornfield, an army doctor returned from the Sikh Wars, and the gracious Sikh butler Mr. Sardar Singh, whose history with Mr. Thornfield appears far deeper and darker than they pretend. As Jane catches ominous glimpses of the pair’s violent history and falls in love with the gruffly tragic Mr. Thornfield, she faces a terrible dilemma: can she possess him—body, soul, and secrets—without revealing her own murderous past?

A satirical romance about identity, guilt, goodness, and the nature of lies, by a writer who Matthew Pearl calls “superstar-caliber” and whose previous works Gillian Flynn declared “spectacular,” Jane Steele is a brilliant and deeply absorbing book inspired by Charlotte Brontë’s classic Jane Eyre.

I was super excited to read this book, billed as a reimagining of Jane Eyre as a serial killer, even though – I admit – I’ve never read Jane Eyre. But I love historical fiction, and the plot synopsis plus that gorgeous cover put this book at the top of my TBR.

I was pulled into the story right away. The writing and the setting were captivating, and once I picked up this 400+ page book, I basically refused to put it down!

As Jane’s story progressed, I found myself more and more engrossed in the book, unsure of how things would end. And I really loved Jane, and was hoping things would work out in the end.

Now that I’ve returned my copy to the library, I realize that I need a copy on my bookshelf permanently, so I’ve been dropping mega hints to my husband that this would make an excellent birthday gift.

This is a five star read for me for so many reasons (story, characters, setting), but especially because of the writing. Jane Steele is so wonderfully written, and one thing I wasn’t expecting from this book was the humour! This book was really funny at times, but at other times it was so heartbreaking.

Overall, I love this book and can’t wait to put a copy on my bookshelf. Very very highly recommended!!