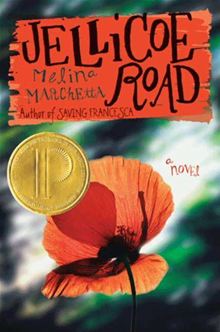 Taylor is leader of the boarders at the Jellicoe School. She has to keep the upper hand in the territory wars and deal with Jonah Griggs - the enigmatic leader of the cadets, and someone she thought she would never see again.

And now Hannah, the person Taylor had come to rely on, has disappeared. Taylor's only clue is a manuscript about five kids who lived in Jellicoe eighteen years ago. She needs to find out more, but this means confronting her own story, making sense of her strange, recurring dream, and finding her mother - who abandoned her on the Jellicoe Road.

The moving, joyous and brilliantly compelling new novel from the best-selling, multi-award-winning author of Looking for Alibrandi and Saving Francesca.

This is another book I borrowed from the library, which I’ve wanted to read for quite some time.

This book won the Printz award in 2009 (for best teen book) so I went into this somewhat apprehensive, because I’ve found in the past that I have really high expectations for award-winning books but don’t always enjoy them (maybe my expectations are too high?).

I’m happy to report, though, that I really enjoyed this book…once I got past the very confusing first few chapters, that is. The book started with no explanation of who the characters were, and then suddenly the book was about a bunch of different characters. I was so confused! I kept reading, figuring the author would explain all at some point, but honestly, for the first few chapters, I had no idea what was going on.

The main character, Taylor, felt very real to me. Her actions frustrated me at times – she had a habit of pushing people away who only wanted to help her – but I felt that I could understand why she acted that way, as I gradually learned more about her childhood with the mother who abandoned her. I also liked that Taylor was a bit snarky at times – she made me laugh on occasion, and this book had enough heaviness to it that I appreciated it when there was some levity.

There was so much going on in this book that I don’t really feel that I can properly write about it without extensively getting into the plot, which I don’t want to do. By the end, though, when the past and present connect and the lives of numerous characters wind up intertwined, I felt so caught up in these characters and their lives and their needs and wants that I couldn’t put this book down. The version I borrowed from the library was over 400 pages and I read it all in one evening – that’s how invested I felt in the outcome.

I think a lot of the characters in this novel wanted to connect with someone and to be known and understood, and we can all identify with that, can’t we? If you like contemporary YA – free from love triangles, zombies, vampires, dystopian or post-apocalyptic societies – with an interesting narrative structure, I definitely recommend this book.