By Cat Patrick and Suzanne Young 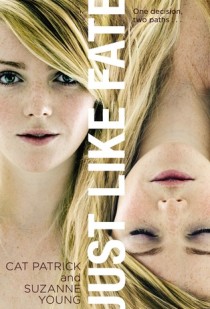 I was partly drawn to this book because I read and enjoyed Cat Patrick’s Revived, and Suzanne Young’s The Program is on my TBR list.

Caroline is at a crossroads. Her grandmother is sick, maybe dying. Like the rest of her family, Caroline’s been at Gram’s bedside since her stroke. With the pressure building, all Caroline wants to do is escape–both her family and the reality of Gram’s failing health. So when Caroline’s best friend offers to take her to a party one fateful Friday night, she must choose: stay by Gram’s side, or go to the party and live her life.

The consequence of this one decision will split Caroline’s fate into two seperate paths – and she’s about to live them both.

Friendships are tested and family drama hits an all-new high as Caroline attempts to rebuild old relationships, and even make a few new ones. If she stays, her longtime crush, Joel, might finally notice her, but if she goes, Chris, the charming college boy, might prove to be everything she’s ever wanted.

Though there are two distinct ways for her fate to unfold, there is only one happy ending…

Doesn’t the premise sound good? It definitely reminds me of the movie Sliding Doors, where we see Gwyneth Paltrow’s character living two different lives, based on a single event. Caroline’s grandmother is in the hospital, dying, when her best friend Simone asks her to come out. Should she stay, or should she go? We read about both outcomes of this decision, in alternating chapters: in one world, she stayed in the hospital and spent that night with her grandmother. In the other, she went out to a party with her friends.

What I liked a lot about this novel was that there were so many aspects of Caroline’s life effected by her decision, including her relationships with her siblings and parents, her friendship with Simone, and relationships with Joel, her long-time crush, and Chris, a college guy she keeps running into.

I really enjoyed reading the book and seeing how certain elements would pop up throughout each world.  Also, I really liked Chris. He was totally charming, funny, and sweet. Caroline, on the other hand, was aggravating at times. She was so frustrating because she would run away from confrontation, or not say what she really thought, or avoid dealing with things head on. It isn’t that I don’t understand why she acted that way, but it just seemed to be such an obstacle, something that everyone in her life seemed to comment on, but she kept doing it. However, by the end of the book, she had definitely grown, and I liked that I got to see some good changes in her life.

I don’t want to give away any spoilers, so I’ll just say that I really liked the way the book ended. While there is a parallel worlds element to this book, it isn’t science fiction-y, so don’t let that put you off if you don’t think you’re into sci-fi. Definitely a recommended read.