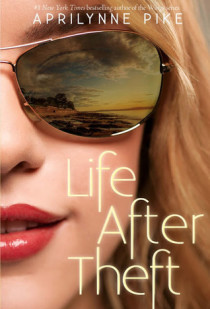 Until recently, I’d never read any of Aprilynne Pike’s books. Then I read Earthbound the day before I picked this book up at Chapters, not realizing they were by the same author!

I read the summary and knew this was my kind of book. I am a sucker for the paranormal!

Moving to a new high school sucks. Especially a rich-kid private school. With uniforms. But nothing is worse than finding out the first girl you meet is dead. And a klepto.

No one can see or hear Kimberlee except Jeff, so–in hopes of bringing an end to the snarkiest haunting in history–he agrees to help her complete her “unfinished business.” But when the enmity between Kimberlee and Jeff’s new crush, Sera, manages to continue posthumously, Jeff wonders if he’s made the right choice.

I loved the premise. A kleptomaniac ghost who needs the new kid in school’s help to return everything she stole so she can move on? Sold!

I liked the dynamic between Jeff and Kimberlee. Neither one of them really liked the other at first, but she needed him, and they were stuck helping each other. Jeff was a really likeable, nice guy. The more I got to know about Kimberlee’s life, the sadder I felt for her. It was a typical story of a girl who, from the outside, seemed like she had everything but on the inside, it was a different story. And let’s be honest, when she was alive, Kimberlee was not a very nice girl.

Then there’s Sera, Jeff’s crush, who Kimberlee can’t stand. I wasn’t sure about Sera at first – could I trust Kimberlee’s warnings to Jeff to stay away from her, or was Kimberlee the one I shouldn’t trust?

I do wish that there was more about Kimberlee in the book. I would have liked to learn more about her life, or read more scenes between her and Jeff, but a big focus was on Jeff’s plan to help return everything she stole from people, and about his relationship with Sera.

Overall, I really liked this book and read it very quickly. Between this and Earthbound, which I read right before this book, I liked this one a lot more. And now I want to read Aprilynne Pike’s other books!