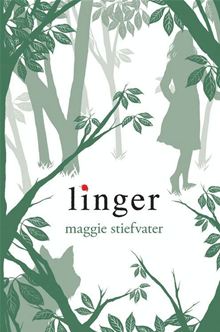 Series: The Wolves of Mercy Falls #2

Once Grace and Sam have found each other, they know they must fight to stay together. For Sam, this means a reckoning with his werewolf past. For Grace, it means facing a future that is less and less certain.

Into their world comes a new wolf named Cole, whose past is full of hurt and danger. He is wrestling with his own demons, embracing the life of a wolf while denying the ties of being a human.

For Grace, Sam, and Cole, life a constant struggle between two forces--wolf and human--with love baring its two sides as well. It is harrowing and euphoric, freeing and entrapping, enticing and alarming. As their world falls apart, love is what lingers. But will it be enough?

This is the second book in the series, following Shiver.

I liked Shiver, and assumed I would like this book as well. Overall, I did enjoy this, but it took me some time to really get into it (which may be due to the eight months that have passed since I read Shiver, and so I had forgotten much of what happened).

One of my complaints with Shiver was about Grace’s relationship with her parents, and I was happy to see that become a major plot point here. Grace begins to rebel, which she has never done before, when her parents don’t really take to Sam being in her life so much –  although I can’t really see why they feel that way (up until a certain incident, which I won’t spoil) – Sam is a nice, polite boy who cares for and respects their daughter, and Grace is still a straight-A student. But I suppose as a plot device, it works if you don’t over-think it.

In addition to Sam and Grace’s point of view narrations, the characters of Isabelle and Cole appear as narrators. I appreciated the way this widened the scope of the story.

The more I read this book, the more I really liked Isabelle. She was tough and not afraid to tell people what she really thought. Inf fact, there were times where she seemed to be the only voice of reason.

Cole, on the other hand, is a character that took some time for me to get used to. I wasn’t really sure what his purpose was for the story, and he just came across as an obnoxious, know-it-all, arrogant ass. However, he became more interesting as the story progressed, and as I’m sure he will play a bigger part in the final book of the series, Forever, I hope that I grow to care for him a bit more in the next book.

Grace and Sam’s relationship still seemed real to me – despite the heavier, more serious tone to this book than Shiver, there were moments of humour, and they have fun together and really enjoy each other’s company. It isn’t just brooding, lust, and all those other things that usually make me roll my eyes when I read YA ‘romances’, although this idea that they’ll just die without each other gets a little old by the end of the story, for me. We get it – you’re super duper ultra in love. Enough (can you tell I don’t totally love romance stories?).

There was some interesting stuff towards the end where Cole, who, it turns out, is a bit of a genius, develops a theory behind the ‘how’ of the shifting between human and werewolf, and I would really like to read more about that in the next book.

I think that, because I enjoyed Shiver so much more than I thought I would, my expectations were perhaps too high for this book. I found myself somewhat disappointed that some interesting plot points were hinted at but not really explored (e.g. Beck making these new wolves). I also thought they took way too long to deal with Grace’s failing health.

In all likelihood, those things will be addressed in the final book of the series, and let’s be honest, sometimes the second book in a trilogy is the toughest one to get through: it lacks the newness and wonder of the first book in a great new trilogy, and it doesn’t have the urgency and sense of resolution that the third one does. The second book in a trilogy must somehow move the plot along and sustain the world-building without really resolving too much, and without making the reader lose interest in the story.

Overall, I simply wanted more from this book. If you’ve read Shiver and enjoyed it, I recommend that you read this one, but I am really hoping for more from Forever (and perhaps I shouldn’t wait another eight months to read that one).