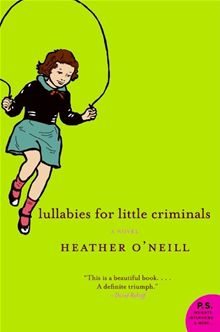 Published by Harper Perennial on October 17, 2006

At thirteen, Baby vacillates between childhood comforts and adult temptation: still young enough to drag her dolls around in a vinyl suitcase yet old enough to know more than she should about urban cruelties. Motherless, she lives with her father Jules who takes better care of his heroin habit than he does of his daughter. Baby's gift is a genius for spinning stories and for cherishing the small crumbs of happiness that fall into her lap. But her blossoming beauty has captured the attention of a charismatic and dangerous local pimp who runs an army of sad slavishly devoted girls- a volatile situation even the normally oblivious Jules cannot ignore. And when an escape disguised as betrayal threatens to crush Baby's spirit, she will ultimately realize that the power of salvation rests in her hands alone.

This is a book that I remember seeing everywhere and hearing a lot about when it was released but it took me a long time to get around to reading it. It was nominated for, and won, numerous awards.

This book was well-written and interesting, but I never really connected with the characters. It was almost like reading a collection of short stories about Baby and her father, Jules.

Being Canadian, I liked that the story took place in Montreal, a city I have visited many times. Every time a street name was mentioned that I recognized, it was a little exciting!

Baby’s father, Jules, was, to be quite honest, annoying. He never seemed to make good choices. Jules was a poor, single father, who was only 15 when Baby was born, and who dropped out of school after grade eight. He was also a drug addict. It was tough for me to feel any sort of sympathy or connection to him.

Similarly, Baby did things and made choices that made me shake my head and want to tell her to stop and think! But that’s the thing about being a child – you don’t always know enough to know any better and you can’t foresee the consequences of your actions.

There were parts of the novel that I thought were very well done and liked, such as the chapter outlining Baby’s brief time in a foster home, and her romance with Xavier, which was quite sweet. However, I was uncomfortable reading about Baby as a prostitute and her relationship with Alphonse, her pimp. It was a bit much for me, given how young and inexperienced she is.

This is another one of those books that I feel like I ‘should’ like, given its popularity and awards, but I didn’t feel connected to the characters and didn’t even like them much. I know people have read it and loved it though. If you’ve read it, share your opinion in the comments section!