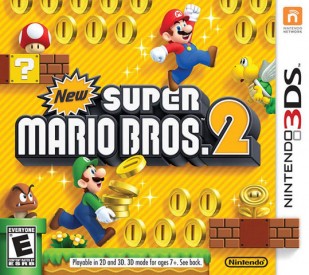 This game was released in North America on August 19. I pre-ordered through Future Shop and received it on August 20. It doesn’t seem like that long ago that I was getting into Super Mario 3D Land for this system – a game that I am still re-playing and loving –  but any new Mario game is a big deal to me and I was super excited to play this latest game.

This is a typical side-scrolling Mario platform game, where you go from left to right through the level, reaching a midway point flag and then the big flagpole at the end of the level. Although it came out only for the 3DS, the 3D doesn’t really add anything to this game, unlike SM3DL (other than to make the background of the levels appear more 3D). However, the 3DS Streepass comes into play here (more on that later), so I suppose I can see why it’s a 3DS exclusive, rather than playable on the DS or DSi.

As the title indicates, this game is the sequel to the DS’s New Super Mario Bros., which came out in 2006. Like that game, the story here is that Princess Peach has been kidnapped and needs to be rescued by Mario (and Luigi, who becomes a playable character once you beat the game by holding down the L and R buttons while selecting your game file). Also, as in that game, here we have a side-scrolling platformer with an overworld map and levels containing secret exits (I love those!) and the usual power ups: star, mushroom, fire flower, mini mushroom, giant mushroom. However, I was very pleased to see that the mini and giant mushrooms are used very infrequently in this game. Also, I was happy to see that the raccoon leaf appears in this game as a power up.

There is also the return of the star coin: three appear somewhere in each level, including in fortresses (which are now being called towers, I think – I still use the Super Nintendo-era Super Mario World lingo though!), castles, and ghost houses. Star coins are used throughout the game to unlock certain pathways in the overworld maps, and you require a certain number to unlock a special world later on. If you are a completionist like me, you will not rest until you’ve collected every star coin in the game!

Obviously it’s difficult to talk about this game without referring to its predecessor. The graphics here are better than in NSMB – everything looks a little crisper to me – and the gameplay and overworld map mechanics are the same (which is fine with me, because I liked NSMB). The music is also pretty much recycled from New Super Mario Bros. Wii. I’ve read complaints about reusing the music, but since I like the game music, I don’t see that as a problem.

But let’s talk about what’s different.

I’ve already mentioned some differences regarding power ups, but should mention the addition of the gold flower, which makes Mario shoot gold fire balls which turn every enemy and block into coins. This reinforces the game’s main focus (well, after rescuing Peach) on collecting as many coins throughout the game as you possibly can. The game keeps a record of every coin collected as you play: the total includes the coins collected in all save files (you can have up to three) as well as those collected in Coin Rush mode (more on that shortly). Also, the coins you collect are added to your total even if you die and return to the overworld map without beating the level.

Aside from the gold flower (which appears pretty rarely), additional items appear to help you rack up those coins: the gold ring, which temporarily turns all enemies gold and makes some of them leave a trail of coins behind, and the gold block, which appears after hitting a coin block a certain number of times, and which can then be worn as a hat (actually, it covers Mario’s entire head and face) and shoots out coins for a limited period of time.

Nintendo has also decided to keep a a world coin total, tracking the total number of coins collected by players all over the world. There is also a reward for collecting one million coins – although at the moment, I’ve got a very long way to go before I get there, having collected just over 82,000 coins.

Then there are Rainbow Levels, revealed by landing on the flagpole with specific times on the level clocks (e.g. to reveal World 1’s Rainbow Level, you need to jump on the flagpole in any level in World 1 with the timer ending in 11. It could be 111, 211, etc.). These levels have no enemies and are super full of coins.

Coin Rush mode is a feature where you play three random levels with a very limited amount of time, trying to collect as many coins as possible along the way. If you survive to the end of the third level, your coin total is displayed and if you choose to keep that record, it will be shared with other players through Streetpass. You can try to beat the Streetpass records you receive from other players. As I mentioned, these coins are also added to your overall total, so Coin Rush mode seems to be pretty crucial to players aiming for the one million coin mark. This is also a very fun, frantic way to play Mario that really brings out the competitive side in me! When you challenge a Streetpass record, the other player’s coin total isn’t shown until you’ve completed the challenge, so to make sure you win, you’d better collect as many coins as possible!

Another addition to the game are the cannon levels. As in NSMB and NSMB Wii, cannons can be used to warp from one world to another. What’s new here is that the cannons are playable levels. However, all you can do is control Mario’s jumps. He is fired out of the cannon and starts running, and you can’t slow him down, speed him up, stop him, or change direction. You need to time your jumps very carefully to get through this level without dying, as there are a number of enemies in your way. This was a really fun way to change something that had become pretty standard for this series.

Many reviews I’ve read/watched talked an awful lot about how similar this game is to NSMB, and while that’s true, I also think this is a better game. As I mentioned, the graphics have improved, and extras like the new power ups and Coin Rush are fun. The things I liked about the first game – overworld map, replayability, star coins, secret exits to unlock levels, and hidden worlds – are all here but somehow better. For example, while there are 6 main game worlds, three are unlockable and not even displayed on the mini game world map until you unlock them (one world is only unlockable after you beat the main game but the other two can be unlocked throughout the main game). I found some of the secret exits to be very well hidden and took several play throughs of certain levels to find them (World 6 ghost house!). Trying to find star coins, secret exits, and going for the one million coin goal means that you will be replaying this game a lot.

There is enough new stuff here to keep me happy: the coin challenge, the Cannon and Rainbow levels, and Coin Rush. While the level design is similar to NSMB (and shouldn’t it be, if it’s a sequel?), I actually found myself having a lot more fun playing this game than I ever did with NSMB. It was fun, and challenging without being so difficult as to make me rage quit. Somehow this game struck the right balance for me between familiar and fresh and I literally could not put it down: I took it with me and my husband on vacation to Montreal last week and played everywhere: in the train station, on the train, in the hotel, in restaurants when my husband went to use the washroom…I couldn’t stop!

As in recent Mario games, there are achievements that will provide you with stars for your save file: one star for beating Bowser at the end of World 6, another for finding all star coins, another for finding all moon coins, another for unlocking/beating all levels (including cannon and hidden levels), and a final star for maxing out the number of lives (which, at this point, is the only one I have yet to achieve). If you make it through the game and beat all levels without using the white raccoon leaf, which appears when you die a certain number of times in a level and provides you with some invincibility to get through it, your file stars will also sparkle.

Clearly, there is a lot to do here. I am already replaying through the levels as Luigi, working on my one million coin goal. If you have a 3DS, I definitely recommend this game!