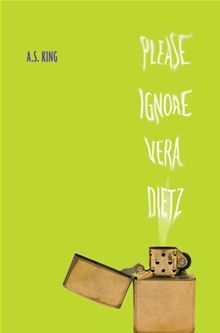 Published by Alfred A. Knopf Books for Young Readers on October 12, 2010

Vera’s spent her whole life secretly in love with her best friend, Charlie Kahn. And over the years she’s kept a lot of his secrets. Even after he betrayed her. Even after he ruined everything.

So when Charlie dies in dark circumstances, Vera knows a lot more than anyone—the kids at school, his family, even the police. But will she emerge to clear his name? Does she even want to?

Charlie was Vera’s best friend. They grew up next door to each other and sort of fell in love with each other. However, as Charlie started spending time with a group of kids they called the Detentionheads, he began to act stranger and they drifted apart.

When the book starts, Charlie is dead. The chapters alternate between various past events in Vera’s life, and the present, dealing with the aftermath of his death. Some chapters are narrated by Charlie himself from beyond the grave, or from Vera’s dad. I loved these chapters because they added an extra glimpse into these characters.

Through Vera’s eyes, Charlie had become a crappy friend, and she ended up feeling betrayed by him. I felt awful for Vera because she suffered some pretty terrible things at the hands of Charlie and his new crew. At the same time, Vera was dealing with her developing feelings for an older co-worker at the pizza place where she worked as a delivery driver. She was also growing up with her father, struggling to raise her as a single parent after Vera’s mom ran off with another man a few years ago.

Vera’s life was complicated and, at times, very difficult, and while I thought she was sometimes very smart and wise for her age, she was also sometimes very stupid in that her coping mechanisms for dealing with Charlie’s death and their crumbling friendship involved drinking, driving, and fooling around with an older guy. But you know, as much as I found myself mentally yelling at Vera to stop doing whatever stupid thing she was doing, I also thought she was very relatable, and I wanted her to pull through everything and come out okay.

The book also slowly built up to unravelling what happened to Charlie the night he died. It was sort of in the background throughout the whole book, and didn’t become a main focus until the very end. I so enjoyed reading about Vera and her life that I didn’t mind not finding about what happened the night Charlie died until the end of the book. I thought Vera was really smart, funny, real, and pretty tough. She wasn’t afraid to stick up for herself, but she wasn’t some super-confident character that I couldn’t relate to, either. She just was herself, and I thought she was pretty cool (aside from the drinking and driving, which she certainly learned from).

I enjoyed seeing her relationship with her father develop, especially when they finally began to move on from her mother running off. This book is full of so many secondary, interesting (but not necessarily likeable) characters, and it was very easy to get attached to Vera and care about her. This book was one where I could get lost and just feel totally part of the character’s world. I definitely recommend this book!