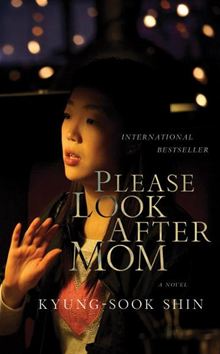 An international sensation and a bestseller that has sold over 1.5 million copies author's Korea, Please Look After Mom is a stunning, deeply moving story of a family's search for their missing mother - and their discovery of the desires, heartaches and secrets they never realized she harbored within.

When sixty-nine year old So-nyo is separated from her husband among the crowds of the Seoul subway station, and vanishes, their children are consumed with loud recriminations, and are awash in sorrow and guilt. As they argue over the "Missing" flyers they are posting throughout the city - how large of a reward to offer, the best way to phrase the text - they realize that none of them have a recent photograph of Mom. Soon a larger question emerges: do they really know the woman they called Mom?

Told by the alternating voices of Mom's daughter, son, her husband and, in the shattering conclusion, by Mom herself, the novel pieces together, Rashomon-style, a life that appears ordinary but is anything but.

This is a mystery of one mother that reveals itself to be the mystery of all our mothers: about her triumphs and disappointments and about who she is on her own terms, separate from who she is to her family. If you have ever been a daughter, a son, a husband or a mother, Please Look After Mom is a revelation - one that will bring tears to your eyes.

I won’t bother doing much recapping, because everything you need to know is in the first sentence of the synopsis: So-nyo is separated from her husband while taking the subway in Seoul, and then is missing. The family begins to search for her, but as they do, they realize how little they know about her.

I absolutely loved this book. It made me sad, but it was also wonderful. The second-person narrative was tricky and took some getting used to, but I liked it.

Each chapter is told by a different narrator, including one of So-nyo’s daughters; her eldest son; and her husband. Each narrator reveals different memories of So-nyo, and expresses regret about what his/her relationship with So-nyo had become. I particularly thought the chapter narrated by her husband was heartbreaking, perhaps because I’m still a newlywed (I think – how long can you call yourself that? I’ve been married for 9 months) and to read about their 50 year marriage and his expression of regret and love was very touching. It made me think about my marriage and relationship with my husband, and wonder what we would be to each other in another few decades.

I also enjoyed getting to read about the characters’ lives in their village, because it was new to me and so interesting. I liked reading about the different celebrations, like ancestral rites, and even the foods they ate. It was one of those books that made me remember that there is a bigger world out there than the one I think I know.

The picture of So-nyo that emerged was of a woman who did anything and everything she could to give her children a good life, despite the numerous hardships that they faced living in the country in Chongup. She was tireless, hard-working, loving, and strong. But while they searched for her, her children realized that they only knew her as ‘mom’ and have not ever considered that she, too, was once a child, a daughter, a teenager, a person with her own dreams and wants. For the first time, they began to think about her as her own person and ask themselves who she really was.

This book, of course, made me think of my own parents (because my father was also once a son, child, teenager too), and while this isn’t the first book I’ve read to make me think about my parents before they were ‘my parents’, it did so in a unique way. This book was unlike any other I’ve read.

As a child, there is something humbling in that first moment that you realize your parents are people and had lives before they had you, before they were married, and even before they met each other. In that now-long-ago moment, when I had my own realization about my parents as people, a permanent shift in my world and my perspective ocurred, and reading about the characters in this book having that moment only after their mother was gone made me so happy and thankful to still have my parents.

I definitely recommend this book, and will be looking for any of the author’s other works in English.