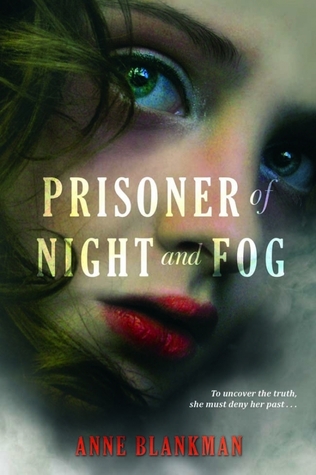 Prisoner of Night and Fog By Anne Blankman

Series: Prisoner of Night and Fog #1

In 1930s Munich, danger lurks behind dark corners, and secrets are buried deep within the city. But Gretchen Müller, who grew up in the National Socialist Party under the wing of her "uncle" Dolf, has been shielded from that side of society ever since her father traded his life for Dolf's, and Gretchen is his favorite, his pet.

Uncle Dolf is none other than Adolf Hitler.

And Gretchen follows his every command.

Until she meets a fearless and handsome young Jewish reporter named Daniel Cohen. Gretchen should despise Daniel, yet she can't stop herself from listening to his story: that her father, the adored Nazi martyr, was actually murdered by an unknown comrade. She also can't help the fierce attraction brewing between them, despite everything she's been taught to believe about Jews.

As Gretchen investigates the very people she's always considered friends, she must decide where her loyalties lie. Will she choose the safety of her former life as a Nazi darling, or will she dare to dig up the truth—even if it could get her and Daniel killed?

From debut author Anne Blankman comes this harrowing and evocative story about an ordinary girl faced with the extraordinary decision to give up everything she's ever believed . . . and to trust her own heart instead.

Oh boy, this was one of my most anticipated releases of 2014, and it did not disappoint! I enjoy historical fiction, and the second World War has always been a historical period that fascinates me. The premise of this one was irresistible.

I was pulled into the story right away. The setting, the detail, the pacing – it was all working for me. There was so much detail here and I definitely got the sense that the author did a lot of research for this book. She mixes true events and real people with the fictional story of Gretchen and her family, and I thought it was really well-done.

I did not want to put this book down once I started. Gretchen was someone that I was rooting for immediately. Although she and her family seemed to be held in high esteem by Hitler and his associates, as she began to uncover the truth behind her father’s death years earlier, she put herself in danger. On top of that,  her brother was menacing.  He was cold and dangerous, and the more involved he became with Hitler’s organization, the more frightening he became.

Gretchen’s relationship with Daniel, the Jewish journalist she meets, was tentative at first, but the more she found herself questioning long-held beliefs about Hitler and her family, the more she came to trust him and care for him. I loved seeing Gretchen start to question her beliefs and to open up to Daniel.

After I finished the book, I realized it’s part of a series, and thank goodness, because I need to know what happens next! I’ve got some ideas, but really have no clue where the author is going to take Gretchen’s story next. All I know is, I will absolutely be reading it!