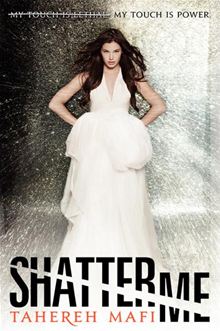 Shatter Me By Tahereh Mafi

I have a curse
I have a gift

I am a monster
I'm more than human

I am their weapon
I will fight back

The last time she did, it was an accident, but The Reestablishment locked her up for murder. No one knows why Juliette’s touch is fatal. As long as she doesn’t hurt anyone else, no one really cares. The world is too busy crumbling to pieces to pay attention to a 17-year-old girl. Diseases are destroying the population, food is hard to find, birds don’t fly anymore, and the clouds are the wrong color.

The Reestablishment said their way was the only way to fix things, so they threw Juliette in a cell. Now so many people are dead that the survivors are whispering war – and The Reestablishment has changed its mind. Maybe Juliette is more than a tortured soul stuffed into a poisonous body. Maybe she’s exactly what they need right now.

Juliette has to make a choice: Be a weapon. Or be a warrior.

This has been on my TBR list since it came out last fall, so as soon as I got my library card, I put a hold on this one and picked it up as soon as it was available!

Hmm, how to summarize how I felt about this book…I feel like in spite of the writing, I liked this book. Does that make sense? I’ll try to explain below.

Let me get the negativity out of the way first and mention the things that I didn’t enjoy. As I’ve mentioned before, I don’t really like to read books narrated in first-person present tense, and this book was that kind of book. Something about it just seems awkward to me. However, if I really love a book – the characters, story, etc. – I can overlook something like that. I have in the past. It isn’t really a make-or-break sort of thing to me.

You know what is really difficult to overlook, though? Heavily stylized writing and an overwhelming amount of metaphors and similes. Honestly, so many sentences. Were. Written. Just. Like. This.

which I find very distracting. There were also an astounding number of run-on sentences. At times, it made sense to me as a mechanic for showing Juliette’s sense of urgency or some sort of heightened emotional state, but as with every other writing device employed in the book, it was used so often that it lost any impact it may have had initially and just annoyed me.

As for the similes and metaphors – they were everywhere. A lot of them didn’t make any sense to me, and I felt myself rolling my eyes again and again. I have unfortunately returned my copy to the library already, so I can’t turn to the pages I wanted to go back to for examples of these metaphors/ Instead, let me share some examples that I came across on Goodreads:

“Hate looks like everybody else until it smiles. Until it spins around and lies with lips and teeth carved into semblance of something too passive to punch.” (From Emily May’s review)

“His eyes scan the sil­hou­ette of my struc­ture and the slow motion makes my heart race. I catch the rose petals as they fall from my cheeks, as they float around the frame of my body, as they cover me in some­thing that feels like the absence of courage.” (From Kat Kennedy’s review)

I wish I still had the book, because I recall three different figures of speech involving butter. That must be some sort of record.

Do you understand what I mean when I say that a lot of the metaphors didn’t make much sense to me? I really just wanted Juliette to speak plainly, to say something and be straightforward. None of the other characters spoke this way, and I can see why the imagery and convoluted metaphors are used in Juliette’s narration, in her head, because she has spent a lot of time alone, having her sanity put into question. I really do understand why someone may want to write a character that way. But as I mentioned, when the kind of imagery and figures of speech that are used here are used as frequently as they are, I found that they became either meaningless or outright confusing.

However, I really did like this book, despite my complaints listed above. For one thing, I loved the idea of it: Juliette’s touch is fatal. She cannot touch or be touched by anyone, and through flashbacks and Juliette’s narration, we learn that once her parents realized what she could do, they basically abandoned her. Juliette is a very lonely, isolated girl, and it made me feel for her right away. I won’t get into what happens to Juliette after we encounter her in the asylum, but the setting changes frequently enough that I really did feel like there was always something happening.

I also liked the other characters in the book: Adam (the love interest), Kenji (he brought some much-needed humour), and James (Adam’s brother). They were young people living in a messed up, mean, hard world, and I really liked them and wanted to know what was going to happen to them.

Of course, I didn’t like Warner, the villain, but he was a good villain in that he was sufficiently creepy.

The romance between Adam and Juliette was enjoyable because: a) it was not part of a love triangle; b) they had a history – he wasn’t just some random guy; and c) he is able to touch her ( remember, her touch is lethal). Juliette had been so sad and alone and craving but fearing human contact for so many years that I found it very sweet that just being able to hold his hand made her so happy.

The plot also had its twists and turns, and while they weren’t exactly mind-blowing surprises, I appreciated that the author wanted to keep readers guessing about what was going to happen and what everyone’s motives were.

The sequel, Unravel Me, will be coming out in February and I will definitely read it, because I want to know what will happen next to these characters. I just hope the metaphors are toned down in that next installment!