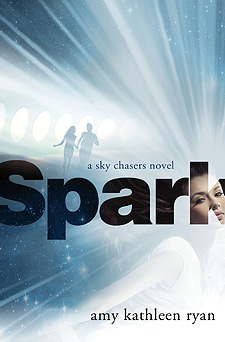 Waverly and Kieran are finally reunited on the Empyrean. Kieran has led the boys safely up to this point, and now that the girls are back, their mission seems slightly less impossible: to chase down the New Horizon, and save their parents from the enemy ship. But nothing is truly as it seems…Kieran’s leadership methods have raised Seth’s hackles— and Waverly’s suspicions. Is this really her fiancé? The handsome, loving boy she was torn from just a short time before? More and more, she finds her thoughts aligned with Seth’s. But if Seth is Kieran’s Enemy No. 1, what does that make her?

In one night, a strange explosion rocks the Empyrean—shooting them off course and delaying their pursuit of the New Horizon—and Seth is mysteriously released from the brig. Seth is the most obvious suspect for the explosion, and Waverly the most obvious suspect for releasing him. As the tension reaches a boiling point, will Seth be able to find the true culprit before Kieran locks them both away—or worse? Will Waverly follow her heart, even if it puts lives at risk? With the balance of power precarious and the clock ticking, every decision counts… every step brings them closer to a new beginning, or a sudden end...

(MINOR SPOILERS BELOW FOR GLOW)

This is the sequel to Glow, which I read earlier this year and loved. I couldn’t find it on the Kobo store, to my surprise, so I purchased the e-book through Google Play.

This book picks up where Glow left off, with Waverly and the girls back on the Empyrean, and Kieran in charge of the ship with Seth locked up in the brig. The adults are still on the New Horizon, in Anne Mather’s clutches.

Throughout the book, Waverly, Kieran, Seth, and the other kids struggle with ideas of revenge and justice, democracy and dictatorship, and how to get their parents back. There are no adults left to run the ship, and so they must handle the day to day tasks necessary to keep everything running smoothly, including piloting the ship, tending to the livestock, and taking on the role of the ship’s doctor.

Some of the history between the New Horizon and Empyrean was revealed in this book, which was interesting, and reminded me that part of what I liked so much about Glow was that there weren’t clear-cut good guys and bad guys – just when I thought I had someone/something figured out, I learned something new that made me see that person differently. In fact, Kieran and Seth seem to have undergone some sort of role reversal over the course of the two books, with Kieran now the leader of the ship and Seth the shunned outcast.

The characters on the Empyrean have gone through some pretty serious, traumatic events since the beginning of Glow (Waverly’s capture and experiences on the New Horizon; Kieran being threatened by Seth and almost killed, and then  becoming a self-appointed leader of the Empyrean; Seth going from de facto leader to prisoner aboard his own ship at Kieran’s orders). These events have changed them all, and as a result their relationships have changed. For example, Waverly is no longer trusting and thinks of herself as cold and hard, and Kieran may have been corrupted by his own rise to power, looking at Seth and Waverly as his enemies.

A lot of the conflict in this book takes place between the kids aboard the Empyrean amongst themselves, and I really liked those parts of the story. I couldn’t help but think of Lord of the Flies in space while reading this, so if that appeals to you, you’ll probably enjoy this series.

Somehow I got the idea in my head that there were only two books in this series, and so I read the book expecting things to be resolved by the end, but with just a few pages to go, I couldn’t see how that would be possible (there is a lot of action towards the end of the book!). Well, there was a major cliffhanger of an ending and I was angry with the way things ended, until I saw that there will be another book in this series coming out in the summer of 2013. Gah, I don’t want to wait that long to find out what happens next!!

This book was a real page turner, because I couldn’t quite predict what the characters would do, and when the New Horizon and Anne Mather begin to show up again in the story, I realized that I definitely couldn’t tell what would happen next. I love when I can read a book and not have any idea about what’s going to happen, and just enjoy the journey. This is definitely one of those books.

There is also something eerie about the setting – space! – and knowing that the characters are surrounded by all of that black, deep, emptiness. I get freaked out just watching specials on the Discovery Channel about space, so this series has certainly tapped into something a bit unsettling, as far as I’m concerned, but I liked that, because I felt that it lent some urgency to the story and the actions taken by the characters due to the inherent dangers of their surroundings.

I enjoyed this book as much as I liked Glow, and I continue to recommend this series.