Stone in the Sky Today I’m taking part in a blog tour for Stone in the Sky by Cecil Castellucci, sequel to Tin Star! Read on for my review, a Q&A with the author, and a link to the book trailer!

Spoiler alert! It’s difficult to write this review without referring to things from Tin Star, so if you haven’t read that yet, you’ve been warned! I also found it tough to write about this book without writing about certain events, so I’ve tried to throw in a spoiler alert where applicable.

I was a fan of Tin Star when I read it last year, so I was excited to learn that there would be a sequel and more of Tula’s story!

One of my favourite things about Stone in the Sky was getting to see more of the galaxy: Tula gets off the Yertina Feray and I loved getting to see other ships and even planets. It really hit me that she had been on the Yertina Feray for so long, and her experience stepping foot on solid ground on another planet was so eye-opening in terms of the effects on her both physically and emotionally.

I loved reading about Tula trying to figure out her feelings for Tournour and Reza, who reappears early on in the story. I also loved that questions I had from Tin Star were addressed in Stone in the Sky (spoiler – skip the rest of this paragraph if you don’t want to know): seeing Tula’s sister again was something I didn’t expect, along with visiting on of Earth’s colonies which turned out to be populated only by dead bodies. And getting to see Caleb again was great because I’d wondered, when I finished Tin Star, what would happen to him and to Reza. We meet Reza again very early on in this story, but their conversations about Caleb had me really intrigued about what became of him. I was glad to see him back and helping Tula (end of spoiler).

Dealing with the Imperium, of course, brings Brother Blue back into the picture, and Tula’s encounters with him were fascinating: she was repulsed by him, but at times she could also see why people believed in him. (Spoiler – skip the rest of this paragraph if you don’t want to know) I loved Tula’s final showdown with Brother Blue, but I was sad that it came at the expense of Trevor’s ‘life’: that little Robot was such a companion to her throughout the story that I was really attached to it! I couldn’t believe how sad I felt at its demise, considering it was not a living thing, but like Tula said at one point, Trevor felt like a pet (end of spoiler).

The ending of this book, and Tula’s story, was just right: it was bittersweet, but I was pleased with Tula’s choices and put the book down feeling that she would be happy. Overall, this was a great follow up to Tin Star, with a heartfelt, satisfying conclusion and complex world (galaxy?) building. Highly recommended for science fiction fans!

Cecil was kind enough to answer a couple of my questions about this book:

Q: I saw on Goodreads that you said you spoke with an astronaut as part of your research. I’m curious to know what kinds of questions you asked him/her, as well as what other research went into this series.

A: I did! I feel like if I reveal too much then it will give some stuff away! But let’s just say that I asked astronaut Rick Mastrachhio who is a spacewalking expert and alumni of the ISS what it was like to walk in space. He gave me some good tips on how to move your body which I tried to incorporate into the story for something that happens. It was so cool to talk to him and he was very helpful. It’s hard to do research per se for sci fi when you are making a lot of stuff up. For example, we don’t have faster than light travel and we haven’t met aliens (yet). But I did pull from science in order to springboard into my fiction. The Prairie Rose which is the colony ship that Tula came in on, is inspired by the solar sail ships that NASA is beginning to experiment with. The idea for the sunspa came from the fact that there are so many different kinds of suns on the main sequence of stars. Other research I did was more based in history. I looked a lot at WW II and the Nazi invasion of France and the Vichy government and the California gold rush of 1849.

Q: When you ended Tin Star, did you know immediately where you wanted to take Tula’s story next? Or did it come to you later?

A: I knew exactly how book two ended when I wrote book one. The scene at the end of the book is pretty much what I wrote in my pitch to my editor. I had a very clear idea about what Tula’s journey was.   And not only that, but I had to think and know what humanity’s journey was, because in the end, that is a big part of Tula’s story.

Thank you Cecil for taking the time to answer my questions!

Add the book on Goodreads: Stone in the Sky

And be sure to check out the rest of the tour schedule (click for larger image): 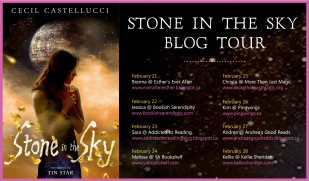