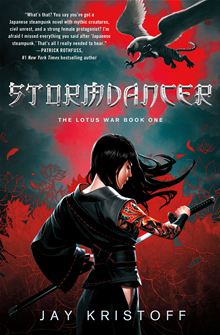 A DYING LAND
The Shima Imperium verges on the brink of environmental collapse; an island nation once rich in tradition and myth, now decimated by clockwork industrialization and the machine-worshipers of the Lotus Guild. The skies are red as blood, the land is choked with toxic pollution, and the great spirit animals that once roamed its wilds have departed forever.

AN IMPOSSIBLE QUEST
The hunters of Shima’s imperial court are charged by their Shōgun to capture a thunder tiger – a legendary creature, half-eagle, half-tiger. But any fool knows the beasts have been extinct for more than a century, and the price of failing the Shōgun is death.

A HIDDEN GIFT
Yukiko is a child of the Fox clan, possessed of a talent that if discovered, would see her executed by the Lotus Guild. Accompanying her father on the Shōgun’s hunt, she finds herself stranded: a young woman alone in Shima’s last wilderness, with only a furious, crippled thunder tiger for company. Even though she can hear his thoughts, even though she saved his life, all she knows for certain is he’d rather see her dead than help her.

But together, the pair will form an indomitable friendship, and rise to challenge the might of an empire.

This book caught my eye on a couple of book blogs that I follow, and I was very intrigued.

This book seemed to have a lot going on: steampunk, fantasy, action – so I was really looking forward to reading it. I was a bit disappointed, then, that it took me as long as it did to get into the story and really enjoy reading this book. I even checked my Kobo – I was about 35-40% through the book by the time I started to get excited about what I was reading. Perhaps part of the problem for me was that the first chunk of the book spent a lot of time world building, which normally I like, but I felt like it was just page after page of descriptions and histories with no real action or characters for me to follow.

However – once a significant event happened around that 35-40% mark and the story changes, I was hooked. I don’t want to really try to summarize the book again, but Yukiko and Buruu, the thunder tiger, ended up alone (for a time) in the woods, and they developed the ability to communicate with each other using her Kenning, through which she can communicate sort of telepathically with animals. The more time they spent together, the more Yukiko and Buruu influenced each other, and I really liked that. Their relationship was the best part of the book for me, because Buruu was sort of hilarious and snarky, mocking Yukiko at times.

There is a lot of action in the book, which I always like, and Yukiko was tough and strong, and I really liked her. The other characters she encountered – Kin, a guildsman; Hiro, a samurai; and her father Masaru and his friends – were interesting and fairly well-developed for my liking. There were a number of characters in the book but I felt that they were pretty well characterized and I wasn’t confused about who was who, which happens to me sometimes in books with many characters.

So I was pretty pleased with myself, having found a fun, exciting book with a story and characters that I loved. Knowing that there was a sequel to come, I was excited and looking forward to reading more from this author, in this book-world. I was all set to recommend this book to YA/steampunk/etc. fans.

But – as I often do after reading a book – I went in search of  some Internet thoughts on this book and came across this and this and this, among others, and it made me stop and think about this book a bit more. Sure, it was a fun, exciting read (after that first chunk), and I liked Yukiko and Buruu, but the posts in these links raised some good points that never even occurred to me as I read the book (e.g. the green-eyed samurai).

I still recommend this book if the plot appeals to you, but I think it’s also a good idea to be aware of the book’s criticisms. I am still planning on reading the sequel when it comes out, but I will likely read it with a more critical eye than I did this book.