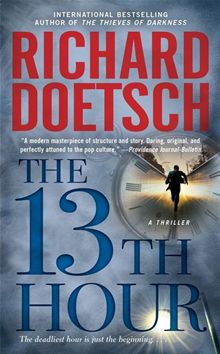 The 13th Hour By Richard Doetsch

A surprising and utterly original story that blends page-turning suspense with exhilarating imagination as a man goes back in time to prevent a vicious crime from ruining his life.

Nick Quinn is being held in jail, accused of the murder of his wife, Julia. He knows she's dead--he saw her bloody corpse--but he's innocent. A mysterious gentleman gives Nick a talisman that takes him back in time, hour by hour, for a total of twelve hours. With each hour, Nick finds more clues to the identity of the killer, but he also discovers that his actions in the past may have unexpected repercussions in the future. If he doesn't set things right by the thirteenth hour, all will be lost, and his desperate attempts to save Julia's life may lead to a far greater catastrophe than he could have ever imagined.

This was an interesting read. I loved the plot. The idea of going back in time incrementally to solve his wife’s murder was very intriguing. The chapters in the book count down from 12, the first chapter in the book, to one, which I thought was a nice touch.

The plot twists and turns, with each hour that Nick travels backwards in time revealing clues to help him save his wife. Nick has no control over this time travel – at the end of the hour, he is transported back, no matter what he is doing or where he is, as long as he is holding the talisman. He is able to bring things back with him, provided they are on his person, which I thought was very neat as well.

Nick discovers that his wife’s murder is connected to the robbery of a seemingly-impenetrable vault, and a plane crash that kills all 212 people on board. As Nick learns more about these connections, he begins to realize that his actions, even going backwards, will have an impact on his and his wife’s future.

I love time travel theories and ideas, so I was definitely drawn to this book because of that aspect of the plot. If I wasn’t interested in that sort of thing, I might not have enjoyed this book as much, so if that isn’t your thing, be warned that this may not be the book for you. There wasn’t much in the way of character development, at least not in my opinion, but I think that the story made up for that.

Nick was a likeable guy, and from what we are told of his life with Julia, his wife, they seem to have a perfect life and are still deeply in love after 16 years of marriage. What drives him throughout the novel, as he runs into dead ends and tragic outcomes that he must alter as he continues to move backwards in time, is his love for Julia. My fiance and I are getting married in less than two months, and reading this, I couldn’t help but think about what I would do in Nick’s situation – farfetched, I realize, but what lengths would we go to to save someone we love? Are there any limits to what we would do? In Nick’s case, no – it was very interesting to see his transformation from a trusting, law-abiding citizen to a man who can only depend on himself, unsure of who he could trust, willing to do whatever it takes to change the future in which his wife is murdered.

Overall, I enjoyed this book. I read it very quickly, eagerly wanting to find out who was behind the murder and how the story would end. If you like thrillers, action, and plot twists, I definitely recommend this book.