The Dark and Hollow Places 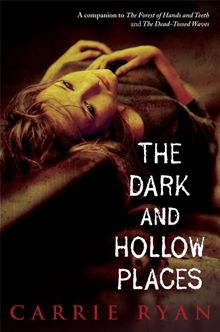 There are many things that Annah would like to forget: the look on her sister’s face before Annah left her behind in the Forest of Hands and Teeth; her first glimpse of the Horde as they swarmed the Dark City; the sear of the barbed wire that would scar her for life. But most of all  Annah would like to forget the morning Elias left her for the Recruiters.  Annah’s world stopped that day  and she’s been waiting for Elias to come home ever since. Somehow  without him  her life doesn’t feel much different than the dead that roam the wasted city around her. Until she meets Catcher  and everything feels alive again. But Catcher has his own secrets. Dark  terrifying truths that link him to a past Annah has longed to forget  and to a future too deadly to consider. And now it’s up to Annah: can she continue to live in a world covered in the blood of the living? Or is death the only escape from the Return’s destruction?

I loved the first two books in this series, and this book was just as good. Annah is the twin sister of Gabry, from The Dead-Tossed Waves. We get to see what her life has been like since she and Gabry were separated as children and her life has been lonely and difficult. Shortly after the story begins, she is reunited with Gabry and Elias, and meets Catcher.  It is not long after that that the the horde of Unconsecrated begin to take over the Dark City where she has been living. There are simply too many of them.

Eventually Elias is able to gain access to the Sanctuary, an island inhabited by fellow Recruiters, and Annah begins to realize that what they thought would be their salvation may be just the opposite.

I don’t want to give away too much of the plot, so I’ll just say that if you liked the first two books, you must read this one!

Annah is a girl who has tried to make herself cold and hard, so that she doesn’t get hurt. She prides herself on being independent and a survivor. She might have been a difficult character to like at first, but as the author tells us more about the character, I found her very likable. I thought she was a good protagonist and even when she did something that I knew was not smart, I was still rooting for her.

The author does a great job of setting the scene in the Dark City, overrun by the dead, who are always closing in on the few remaining living. I really got a sense of the feeling of being surrounded and having to constantly be on guard. It felt almost claustrophobic and was really well written.

Similarly, the scenes that are set in the Sanctuary feel dank, dark, depressing…the atmosphere really came across well. The Recruiters were an interesting addition to the story. While Annah thought they would be kept safe, it turns out that the Recruiters had other things in mind. Because of his immunity, Catcher was very valuable to the Recruiters. However, their only interest in Annah, Gabry and Elias was to use them as bait to ensure that Catcher would always return to the Sanctuary after being sent into the Dark City to scavenge for supplies. Annah discovered some very bad things taking place in the Sanctuary, which added an extra bit of darkness to the book.

Without something to balance this darkness, the book would just be too depressing, so I’m happy to say that the romantic subplots were well-done and, given the characters’ reality, believable. I also liked to see Gabry and Annah, reunited after all these years, getting to know each other and build a relationship.

And of course the suspense and action in this book were great. There are some really good chapters involving subway tunnels where I just couldn’t stop reading, but was also nervous because you never knew who or what was around a dark corner. Throughout the entire book the author created a feeling of being surrounded, never being able to let your guard down, and it was so effective because that is what motivated so many of the characters’ actions throughout the book: this undead horde that was growing larger and constantly moving towards any life it could sense, even in the dark of the subway tunnels. Spooky!

My only complaints would be that I wish the ending would have been more definitive, especially if this is to be the final book in the series. And I wish the reason for the undead outbreak had been explained. I always want to know how a zombie outbreak begins!

Other than those relatively minor gripes, I loved this book. I think that each book in the series got stronger and stronger, and this may have been my favourite. There were definitely moments where I couldn’t imagine how the characters were going to get themselves out of their predicaments, and I love reading a book where I just have no idea what is going to happen next.

I definitely recommend this book, and now that the series is over, I’m a bit sad. I guess I just have to hope that Carrie Ryan decides to continue telling these stories one day!