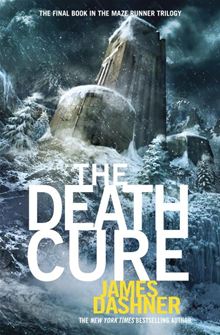 The Death Cure By James Dashner

Published by Delacorte Books for Young Readers on October 11, 2011

It’s the end of the line.

WICKED has taken everything from Thomas: his life, his memories, and now his only friends—the Gladers. But it’s finally over. The trials are complete, after one final test.

What WICKED doesn’t know is that Thomas remembers far more than they think. And it’s enough to prove that he can’t believe a word of what they say.

The truth will be terrifying.

Thomas beat the Maze. He survived the Scorch. He’ll risk anything to save his friends. But the truth might be what ends it all.

The time for lies is over.

Spoiler Alert: I’m going to try not to give too much away, but be warned that there may be spoilers for The Maze Runner, The Scorch Trials, and The Death Cure in this post.

As soon as I finished reading The Scorch Trials, I started reading this book, the final in the trilogy. I was really eager to find out more about WICKED and to get some answers!

I have mixed feelings about this book. Perhaps my expectations were too high, because I was really looking forward to the final installment of the Maze Runner trilogy and was expecting answers to a lot of my questions. I felt that The Scorch Trials raised a number of new questions that I assumed would be answered in this book. While some were answered, unfortunately, many were not, which left me feeling a little disappointed.

Sometimes, though, I like when an author leaves a few loose ends for the reader to contemplate, which certainly seems to be the case here. I don’t want to say too much and spoil the story for those who have yet to read it, but WICKED’s plan and Thomas’s role in the organization were the areas I was most hoping would be fully explored in this book, but they weren’t (at least not to my satisfaction).

However, on the positive side, there were a number of action scenes, which I definitely liked. I also liked reading more about the Cranks and the effect of the Flare virus on people. I also liked that certain characters continued to be fairly prominent in the story. By now, I definitely have my favourites!

But back to the negative: the author ‘offed’ some major characters in this story, and while one of these scenes was really well done and poignant, the other seemed so sudden and I felt that it deserved more time and attention. I mean, here was a character who had been present in each novel, and who seemed, at times, to be very crucial to things, and yet the character’s death scene just felt rushed and no one really seemed to care. I understand that it was in the middle of a pretty intense scene, but I was a bit stunned that there was no more attention paid to the event.

Back to the positives, I liked the optimistic ending, and have been thinking about it for a couple of days! I would love to hear someone else’s thoughts on it. I also thought that, despite the sci-fi nature of the story, the author made the characters (mostly) believable, in that they are just a group of teenagers trying to survive some pretty awful situations, and if there are moments where they seem unsure of themselves and their choices, I can’t blame them! They are risking their lives constantly, put in this situation against their wills, and there are so many unknowns and Variables thrown at them by WICKED. I appreciated that they were second-guessing themselves at times, because it made them more real to me.

If I seem to be going back and forth between liking this book and being disappointed by it, it’s because I still haven’t totally made up my mind about how I feel! Overall, though, I am recommending it because I loved The Maze Runner, really enjoyed The Scorch Trials, and I think if you’ve made it through the first two books, you must read this one, at least to see how it ends (mostly…).