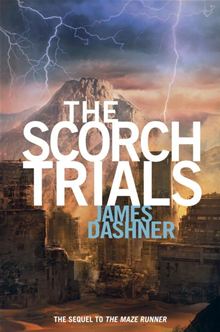 The Scorch Trials By James Dashner

Published by Delacorte Press on October 12, 2010

Solving the Maze was supposed to be the end.

Thomas was sure that escape from the Maze would mean freedom for him and the Gladers. But WICKED isn’t done yet. Phase Two has just begun. The Scorch.

There are no rules. There is no help. You either make it or you die.

The Gladers have two weeks to cross through the Scorch—the most burned-out section of the world. And WICKED has made sure to adjust the variables and stack the odds against them.

Friendships will be tested. Loyalties will be broken. All bets are off.

There are others now. Their survival depends on the Gladers’ destruction—and they’re determined to survive.

There are spoilers in this post for The Maze Runner as well as The Scorch Trials.

This is the sequel to The Maze Runner, which I read last year and really enjoyed.

I had a great time reading The Maze Runner, and was really looking forward to reading its sequel. While I enjoyed it, it did raise more questions than it answered!

While we now know that the organization WICKED is responsible for the Maze and for the boys having their memories wiped, their motives are not entirely clear. We learn that the world has been devastated by solar flares,  and a virus known as the Flare is infecting people, slowly turning them into zombies (known as Cranks), and that WICKED is trying to find a cure, but I am not really clear at this point why this attempt at finding a cure means that the boys have to be subjected to the Maze, Grievers, etc.

However – it is still a very entertaining, action-packed book, and it started off with some really great, creepy opening chapters in the building that the boys were sent to by WICKED after they escaped the Maze. Their next trial, the Scorch Trials, is supposed to be a journey from point A to point B, making their way through a desert terrain. Sounds simple enough, but the hazards that they encounter are pretty terrifying. They encounter a group of girls known as Group B and learn that they were in a Maze as well. However, they seem to view each other as rivals, and there are a lot of moments in this book where Thomas (and the reader) can’t always be sure who to trust.

We get glimpses of Thomas’s past, before the Maze, which just makes me more eager to read the final book in the series, The Death Cure. Many of the characters that I liked from The Maze Runner return in this book, and Thomas’s friendships with them are strengthened through their experiences in the Scorch Trials. I liked seeing the bonds between Thomas and his friends grow stronger, given their suspicion and mistrust of each other through much of The Maze Runner. Thomas has begun to take on more of a leadership role.

I recommend this book, and series, because I like the action, and I like the glimpses we’ve started to get of the wider world, beyond the Maze, and the problems that Thomas and his friends continue to face. I just hope I get some answers in the next installment!