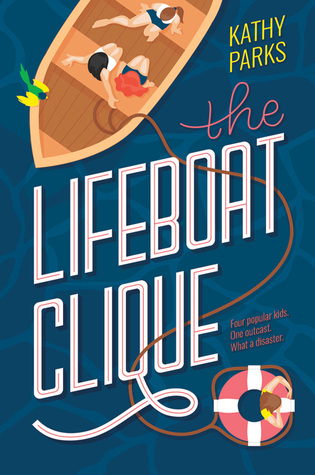 The Lifeboat Clique By Kathy Parks

Some people might say that Denver had a death wish. Why else would she have dared to sneak into a Malibu beach party where she’d be surrounded by enemies, namely including her ex-BFF Abigail?

Oh yeah. Croix. Denver never thought in a million years he’d ask her out, but who was she to question this miracle of fate? Well, that wasn’t the only surprise fate had in store.

During the party a tsunami hit the coast of California, wiping out everything in its path. Denver and a handful of others escaped death by holding onto the roof of the house and were swept out to sea. Of course, one of her fellow castaways was none other than Abigail, who could barely stand the sight of her.

Now that she’s floating in the ocean, stuck on a small boat with the most popular kids in school and waiting to be rescued, Denver wonders what might kill her first-dehydration, sunstroke, or the girl she used to think of as a sister?

A hilariously dark and twisted story that sparkles with a remarkably fresh voice, The Lifeboat Clique is Kathy Park’s irreverent yet insightful novel about how to survive in the most unthinkable circumstances.

I love survival stories, so the synopsis for The Lifeboat Clique definitely captured my attention. This book also has a bit of a mean-girls element to the story which is another thing I love to read about. So right away, I was looking forward to reading it!

I think I saw somewhere that this book was recommended for readers who liked Beauty Queens by Libba Bray. Well I loved Beauty Queens, with its satire and snark, and so I was really pleased right off the bat with The Lifeboat Clique, because the protagonist Denver had a voice that felt very snarky and smart. I really liked her.

I read the book really quickly. I was so caught up in how Denver and the others would survive, and whether or not they would ever be rescued and get back home. I also find myself caught up in the story of Denver and Abigail’s friendship. Their falling out was a bit of a mystery, told through flashbacks, and that totally kept me on edge, eager to know what happened between the former BFFs to turn them into enemies.

The Lifeboat Clique was really funny and fun to read. Recommended!