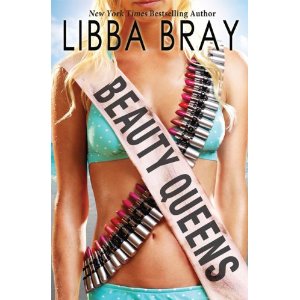 Published by Scholastic Press on March 24, 2011

When a plane crash strands thirteen teen beauty contestants on a mysterious island, they struggle to survive, to get along with one another, to combat the island's other diabolical occupants, and to learn their dance numbers in case they are rescued in time for the competition.

I was so excited for this book! I loved Libba Bray’s Gemma Doyle trilogy, and when I heard this book was coming out, I knew I had to read it!

After the plane crash, only a handful of the girls have survived, and all of the chaperones have died. They are on their own. The girls call each other by the name of the state they’re representing, which helped me keep track of who everyone was. Miss Texas, a pageant veteran named Taylor, immediately takes charge and decides that the girls must keep preparing for the pageant and their inevitable rescue.

While the girls work on their dance steps and interview responses, we slowly learn a bit about each girl and it becomes clear that they are not all sunshine and light! One of the girls, Adina, quickly becomes the voice of opposition to Taylor, particularly when she reveals the real reason she’s participating in the pageant. Adina thinks the girls’ focus on boys, beauty products, and their appearance is shallow and stereotypical.

I thought at first that Adina would be the main character of the story, because her anti-pageant stance becomes a major focus point for a time, but Libba Bray gives each surviving beauty queen a moment in the spotlight and I really appreciated learning about all of them. Throughout the book, they slowly shed their beauty pageant personalities and begin working together to survive, building huts, fishing, and making sure they have proper drinking water.

This book was definitely funny. It satirizes pop culture, gender role stereotypes, consumerism, even politics. I wasn’t expecting the dark humour, and thought the book would be more of a survival story. At the end of each chapter is a “Fun Facts” page filled out by a contestant, which reveals even more about the characters.

There are also commercial breaks between chapters, which skewer things like tampon ads in a way that made me laugh out loud. There are also notes from The Corporation, the company that is responsible for a myriad of ridiculous reality-tv shows, beauty products (seemingly designed to make girls feel self-conscious about anything and everything), and even weapons.

There are also chapters that focus on characters who work for The Corporation, which I won’t say much about as they are linked to the girls’ predicament on the island, but it’s pretty funny stuff! There are even pirates!

I must also mention that, while this book is majorly funny, there is also a message about being who you are, not what people want or expect you to be. Libba Bray deals with some pretty serious issues, such as gender identity, sexuality, racism, cultural stereoptypes, double standards, the pressure put on teen girls by their parents, boys, and society – things that I think are really important for girls to think about and make their own choices about.  It’s a lot to tackle, but combined with the humour and Libba Bray’s excellent writing, nothing comes off as preachy or heavy-handed.

Looking back, there was so much going on this book! The Corporation, political scandal, hunky pirates, an eco-prince, and, oh yeah, a bunch of teenage beauty queens stranded on an island. It sounds like it might be messy and complicated, but somehow, Libba Bray makes it all work, in a way that was both funny and touching.

I loved the way the girls worked together, and encouraged each other to be who they really are. There was some nastiness at the beginning, when everyone was certain they’d be rescued and continued to see the others as pageant competition, but they quickly came together as a team.

My only complaint would be that I wanted to read more about Taylor (Miss Texas) at the end of the book. Her character was definitely my favourite!

I strongly recommend this book. It’s funny, touching, and has a great message, and finds a way to criticize modern culture with humour and startling accuracy. This is a must-read!