The Lying Game: Cross My Heart, Hope To Die 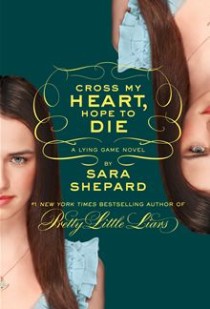 This is the fifth book in the series. Here is the Kobo store’s summary:

It’s not easy being me.

But my twin sister has no choice.

When I died two months ago, my killer told my twin sister to become me—or else. Now Emma has it down to a T. She tosses her hair with the signature Sutton Mercer flip and can lead a Lying Game prank with the best of them. She’s even repairing my relationship with my adoptive family. The only thing she hasn’t done is solve my murder.

Then our birth mother, the woman who abandoned us, showed up in Tucson. Emma hasn’t seen Becky in twelve years, but Becky recognizes Emma immediately—as Emma. Is it a mother’s intuition . . . or does Becky know I’m already gone?

I love these books, but I’m definitely starting to feel that they’re becoming a bit formulaic: Emma has a suspect, Sutton has some memories, Emma pursues her lead until irrefutable evidence shows that her suspect couldn’t have killed Sutton, and then the story wraps up.

I definitely have a suspect – one that I feel like is being so obviously telegraphed as the killer (you’ll probably guess if you’ve read my other reviews) – but I know I’m going to stick with this series and see how it ends. I am a sucker for high school mean girl stories, and Sutton’s friends and their Lying Game club have totally sucked me in. Even if it’s getting a bit predictable, I still had a lot of fun reading this book, and a character died at the end, which certainly raises the stakes for Emma, and has me already looking forward to the next installment.

I liked the way Sutton seems to be realizing how mean she was, even to the people that were close to her, like her friends and family. If my suspicion that she isn’t really dead (maybe she’s in a coma or something) turns out to be true, I’m really looking forward to seeing if she changes her ways after all this. I also like that Emma and Sutton’s family seem to really be getting along by now, and it was so fun to see Emma put on her best Sutton attitude at times!

I still feel like I don’t know Sutton’s friends as much as I’d like to, and the scenes with the Lying Game girls together are usually my favourites, and I felt that this book was a little light on those, but I was surprised that I was actually enjoying the love triangle that developed (a minor triangle though): (Spoiler I guess if you haven’t read the rest of the series) Emma and Ethan are dating, but he’s the only one who knows she’s Emma, not Sutton. Thayer is back in town and he thinks Emma is Sutton, and so is drawn to her even though she’s with Ethan. Emma feels some sort of attraction to Thayer, but has to keep reminding herself that he doesn’t see Emma, he sees Sutton. I think there’s definitely some potential for more drama in this subplot! (End spoiler)

If you’re a fan of the Pretty Little Liars series and/or looking for a fun, sassy read, I definitely recommend that you pick up this series.