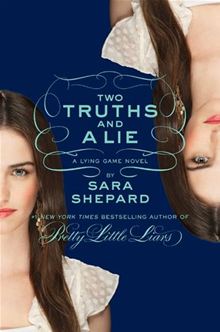 Two Truths and a Lie By Sara Shepard

Published by HarperTeen on February 7, 2012

Sutton Mercer watches from the afterlife as her long-lost twin, Emma Paxton, takes over her identity to solve her murder. But after ruling out her early leads, Emma still hasn’t found Sutton’s killer. A lot of people wanted her dead—but one name keeps popping up: Thayer Vega. When the gorgeous and mysterious Thayer returns to town, Emma has to move fast to figure out whether he’s back for revenge…or if he already got it.

Set in a town where friends can turn into dangerous enemies and everyone harbors dark secrets, The Lying Game is a juicy new series that fans of the #1 New York Times bestselling Pretty Little Liars series—and the hit ABC Family show—will love.

This is the third book in Sara Shepard’s Lying Game series, after The Lying Game and Never Have I Ever.

It’s no secret that I loved the previous books in this series, and it should be no surprise that I loved this one, too.  Emma continues to try to uncover secrets about Sutton’s life, hoping to discover what happened to her sister. Ethan is still the only person who knows the truth.

The character of Thayer has been a big question mark so far in the series. He is referred to, and we know that he’s gone missing and everyone seems to think Sutton had something to do with it, but Emma has no idea what his relationship with Sutton was like or what they meant to each other, if anything. These questions are answered in this book, and I appreciated having some minor mysteries solved.

Emma is trying to balance playing the role of Sutton with staying true to who she really is. Sutton still watches, unable to interfere or communicate, but gaining a few more memories throughout the story that continue to shed some light on things (although sometimes they just raise more questions than answers!). I like that Sutton is starting to see that she was a bit of a bitch to people and mistreated them, but that she is still sarcastic and snarky -it lends some humour to this book.

I had a thought halfway through that perhaps Sutton is not actually dead – maybe her character is in a coma somewhere and she and Emma will have a happy reunion at the conclusion of the series. Not sure how likely that is, but the idea  that Sutton is not really dead took hold and would not let go, so I’m going to hold on to it and see if it ends up being correct!

Overall, if you enjoyed the first two books, you should read this one. We learn a bit more about some of the people in Sutton’s life, although I still look forward to learning more. Emma’s relationship with Ethan becomes more serious, and she begins to bond with Sutton’s mom.

The relationship with Laurel, Sutton’s step-sister, is as complicated as ever, but I want to read more about why they don’t get along. Emma tried to mend the relationship in this book, but Laurel just was not having it.

Seeing as how Shepard’s other series, Pretty Little Liars, has 10 books, I won’t be holding my breath for the big mysteries of this series to be revealed quite yet, but I am eagerly anticipating the next installment!