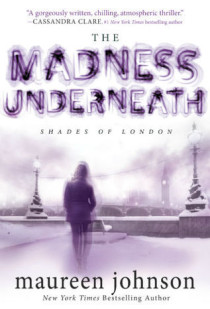 This is the sequel to The Name of the Star, which I read a couple of months ago and loved. Here is the Goodreads summary:

After her near-fatal run-in with the Jack the Ripper copycat, Rory Devereaux has been living in Bristol under the close watch of her parents. So when her therapist suddenly suggests she return to Wexford, Rory jumps at the chance to get back to her friends. But Rory’s brush with the Ripper touched her more than she thought possible: she’s become a human terminus, with the power to eliminate ghosts on contact. She soon finds out that the Shades—the city’s secret ghost-fighting police—are responsible for her return. The Ripper may be gone, but now there is a string of new inexplicable deaths threatening London. Rory has evidence that the deaths are no coincidence. Something much more sinister is going on, and now she must convince the squad to listen to her before it’s too late.

I was really excited for this book, considering how much I loved the previous book, and my hopes were maybe a bit too high going into this one. The story begins shortly after the events at the end of The Name of the Star, with Rory staying with her parents and trying to decide what to do next.

Rory does end up returning to Wexford, and also reunites with Stephen, Callum, and Boo, but much of the first part of the book felt unfocused to me. I still liked it – I enjoyed reading about Rory trying to adjust again to life at Wexford, although she was definitely struggling academically, and also about her encounters with the Shades, once she’s back at school. However, it felt that it took about half the book to really get moving, plot-wise, which was kind of disappointing, since the book was not very long.

SPOILER ALERT My suspicions about things with Jerome not lasting very long came true, which made me happy because it paved the way for something with Stephen. Yay!  END OF SPOILER

Although Rory was as funny as she was in the previous book, I found myself wishing for more of Jazza, more of life at Wexford, and more ghostly encounters. I felt like I was just being given the bare minimum of what I really wanted from this book, and maybe it’s suffering from middle book syndrome, but my high expectations going into this book were, sadly, not met.

That’s not to say I didn’t like the book, just that I wanted more from it. And given the ending, I am assuming there is going to be a third. Oh my gosh, that ending! I don’t want to spoil anything, but it made me both sad, and really excited for the next book!

While The Name of the Star was the better book for me, I still enjoyed this, I love the world and characters that Maureen Johnson has created, and I definitely recommend this series.