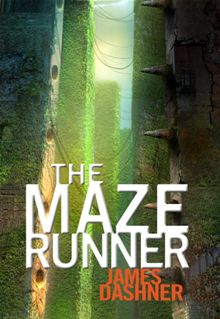 The Maze Runner By James Dashner

Published by Delacorte Press on October 6, 2009

When Thomas wakes up in the lift, the only thing he can remember is his name. He’s surrounded by strangers—boys whose memories are also gone.

Nice to meet ya, shank. Welcome to the Glade.

Outside the towering stone walls that surround the Glade is a limitless, ever-changing maze. It’s the only way out—and no one’s ever made it through alive.

Everything is going to change.

Then a girl arrives. The first girl ever. And the message she delivers is terrifying.

This is another book that I didn’t realize was part of a series until after I had nearly finished. That keeps happening to me!!

This book was awesome. It started with a bang, was action-packed, and the mystery of who the boys are and why they’re in the Glade kept me turning the  pages all night! I finished this in a couple of days – I didn’t want to put it down!!

It reminded me at times of Lord of the Flies, which I haven’t read in years, so I don’t recall details. I suppose what I thought was similar was that it was a group of young boys (in this book, aged from about 12 to 16)  alone, left to survive however they can and, of  course, the tensions that arise.

Not that the boys were completely on their own – they are regularly provided with key supplies by what they call The Creators. They manage a small farm, complete with cows, pigs, and chickens, in order to feed themselves.

I enjoyed reading about the ways they had kept themselves going. The boys had divided themselves into groups who performed different tasks: those who did the farming and animal slaughtering; those who did general clean up; builders; even medics. And then there are the Runners: a group of boys who go out, each day, into the maze that surrounds the Glade, in an effort to map it out and hopefully find an escape.

The thing about the maze is that the doors from the Glade that lead to the maze shut at night, which keeps the boys safe from awful creatures known as Grievers. These things are deadly – and there is a graveyard in the Glade to remind everyone. The maze also seems to change from day to day, making the Runners’ job even more difficult.

Seeing this world through the eyes of Thomas, the newest boy to arrive, was interesting because everything is as new to him as it is to the reader. He quickly learns to stay out of the maze at night, but feels drawn to it somehow, for reasons he can’t explain, wanting to be a Runner.

There are small hints at what the boys’ lives were like ‘before’, but none of them can remember details. There are hints that there was some sort of disaster. However, if stung by a Griever, and if they receive the serum provided by the Creators in time, the boys can survive – but the serum provides them with fleeting memories of their lives before the Maze. When a couple boys believe they’ve encountered Thomas before, but can’t remember the details, people wonder who he really is and what he’s really doing in the Glade.

Things get more complicated when a girl shows up – the first girl to ever arrive in the Glade. And she seems to recognize Thomas, causing everyone to be more suspicious.

I liked the characters in this book. Thomas was a sympathetic character, and it was easy for me to identify with him, as he was just as confused by what was happening as I was! Some of the boys, like Chuk, were young and scared, while others, like Gally, were tough and not very trusting of Thomas. However, they were all just trying to survive, and I thought the conflict between Thomas and some of the boys was believable.

That’s where I’d better stop talking about the plot! This book was a real page-turner. I loved it and can’t wait to read the next, called The Scorch Trials. I definitely recommend this, and I’ll let you know what I think of the next book in the series!