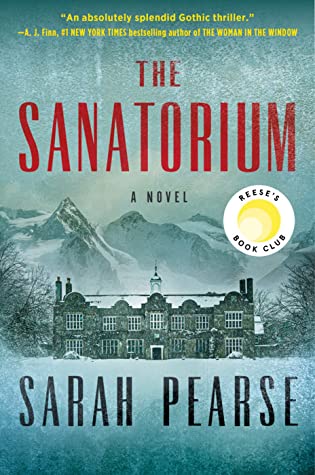 The Sanatorium By Sarah Pearse

Half-hidden by forest and overshadowed by threatening peaks, Le Sommet has always been a sinister place. Long plagued by troubling rumors, the former abandoned sanatorium has since been renovated into a five-star minimalist hotel.

An imposing, isolated getaway spot high up in the Swiss Alps is the last place Elin Warner wants to be. But Elin’s taken time off from her job as a detective, so when her estranged brother, Isaac, and his fiancée, Laure, invite her to celebrate their engagement at the hotel, Elin really has no reason not to accept.

Arriving in the midst of a threatening storm, Elin immediately feels on edge–there’s something about the hotel that makes her nervous. And when they wake the following morning to discover Laure is missing, Elin must trust her instincts if they hope to find her. With the storm closing off all access to the hotel, the longer Laure stays missing, the more the remaining guests start to panic.

Elin is under pressure to find Laure, but no one has realized yet that another woman has gone missing. And she’s the only one who could have warned them just how much danger they are all in. . .

This was one of the books that I treated myself to as a birthday gift a couple of months back, and I was looking forward to reading what I expected to be a tense and twisty thriller.

While this started out pretty strong for me, and I liked the mystery and setting at first, things just began to feel so convoluted and there were too many moments where I thought Elin, the main character, was being daft. And the ending frustrated me because View Spoiler » we had a resolution, which was then swept out from under us. And for what? Was it setting up a sequel/follow up book where we will learn the mystery person’s identity? I found that so incredibly frustrating and annoying. « Hide Spoiler

So this was a quick read that I had high hopes for, but despite really liking the setting and atmosphere, overall this was just fine for me.