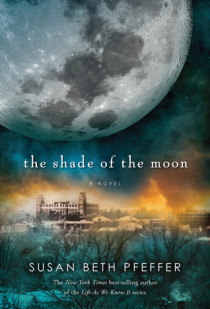 This is the fourth book in the series, after Life As We Knew It,  The Dead and the Gone, and This World We Live In. I loved the first two books, and had mixed feelings about the third.

It’s been more than two years since Jon Evans and his family left Pennsylvania, hoping to find a safe place to live, yet Jon remains haunted by the deaths of those he loved. His prowess on a soccer field has guaranteed him a home in a well-protected enclave. But Jon is painfully aware that a missed goal, a careless word, even falling in love, can put his life and the lives of his mother, his sister Miranda, and her husband, Alex, in jeopardy. Can Jon risk doing what is right in a world gone so terribly wrong?

This book takes place two years after the events of the previous book, This World We Live In. The main character this time around is Jon, Miranda’s youngest brother. He, Lisa, and Gabe are living in an enclave, while the rest of his family lives outside, scattered (well, except for his father, who we are told died on the way to the enclave).

I never really took to Jon in any of the other books, but he seemed like a regular kid – or as regular as a kid could be in the circumstances. But in this book, he was one very unlikeable MC! I really struggled to get through this book and a big part of that is due to the fact that I just did not like Jon.

I also struggled with the way many characters who I had come to know and care about over the course of this series died. It was difficult for me to read about some of these deaths and see the characters take it all very matter of factly, rather than grieve as I thought they would. I mean, maybe that’s my own issue and not a flaw with the book, but it really pulled me out of the story at times.

The world, and society, really seems to go to shit in an incredibly quick period of time and I found that difficult to believe, which also made it incredibly hard for me to get into the story. I struggled to believe that people were killed so frequently and violently, with bodies left in the streets. I think it was just such a leap from the world Miranda and Alex were living in during the earlier books to the world Jon lives in, essentially two years later. I had a very difficult time adjusting to that.

Also, this was a bleak book. I love me some dark, bleak stories, but this book just bummed the heck out of me. Yeesh.

There were other characters in the book – John and Lisa’s domestics; a love interest for Jon; his friends from school – but none of them seemed fully developed as characters for me to care about. They felt more like plot points or something, and so I didn’t care about any of them, not even when some of them died.

As mentioned earlier, I did not find Jon very likeable or sympathetic. ESPECIALLY when I read about what happened between Jon and Julie during events at the end of This World We Live In. He admits that he was going to have sex with her because he loved her and he knew she loved him, even though she told him to stop, but he doesn’t think of himself as a rapist. What?? This seemed to be part of life in Jon’s enclave – guys had sex with ‘grub’ girls (who are apparently below the ‘clavers’ as humans)  whether the girls wanted to or not. So I don’t know if Jon didn’t see himself as a bad guy or rapist because he viewed it all as something that was accepted in the enclave – which was basically all of society, as far as he was concerned – or if he told himself that to alleviate any guilt he was feeling in the aftermath of Julie’s death. Either way, it most definitely did not endear him to me.

I kept trying to put myself in Jon’s shoes and see things through his eyes, given his experiences, but I struggled so much to do that.

The plot in this book felt directionless. It was also slow at times, but suddenly things would move along really really quickly.

This was a difficult book to read – and review – because I liked the first two books so much, and this one felt like something completely different. I don’t know if the series is going to continue after this book, but if it does, I don’t know if I’ll be reading any further books.

If you have read the others in this series, you might like this one, to see how things have changed over time. I do still recommend that you give it a read if you have been a fan of this series, but it just wasn’t the right book for me.