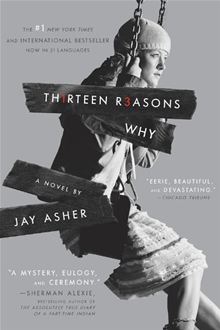 Thirteen Reasons Why By Jay Asher

Clay Jensen doesn't want anything to do with the tapes Hannah Baker made. Hannah is dead. Her secrets should be buried with her.

Then Hannah's voice tells Clay that his name is on her tapes-- and that he is, in some way, responsible for her death.

All through the night, Clay keeps listening. He follows Hannah's recorded words throughout his small town. . .

. . .and what he discovers changes his life forever.

This is another book that was on my TBR for quite some time, and that I borrowed from the library with my new card.

The summary above captures the basic plot: Clay, our narrator, receives a box of cassette tapes recorded by a classmate, Hannah Baker, who has recently committed suicide. The thirteen reasons in the title relate to thirteen people, each of whom is to listen to the tapes and pass them on to the next person. Clay has no idea why he is on the tapes or what he ever did to Hannah, but he has to listen to the tapes to find out.

I have mixed feelings about this book. On the one hand, the idea of Hannah narrating the tapes and making everyone pass them on to each other was intriguing. It gave the reader some insight into her character, and, whether it’s someone in the news or a character in a book, when someone commits suicide, I always want to know why. There may not be a single reason that can be easily explained, and that is the case here – Hannah mentions the snowball effect, and that it wasn’t just one thing that led to her death, but a number of things over time, all connected. The people on her tapes are connected through their behaviour towards Hannah and learn how not only their individual behaviour affected her, but also how it relates to the other people mentioned in the tapes.

Clay was a nice guy, who seemed to do well in school and get along with his family. Even Hannah mentions on the tapes that he was a nice guy and that she never heard anything bad about him.

On the other hand, though, Hannah’s tapes felt a bit revenge-y to me. I also wasn’t very clear, even after Clay heard his ‘story’ on the tapes, why he belonged on her list. At times, I felt like Hannah was blaming people for things that she should take responsibility for, or that they couldn’t have known would hurt her. SPOILERS – SKIP TO THE NEXT PARAGRAPH TO AVOID READING SPOILERS: For example, sending the tapes to Justin for ‘letting’ his friend Bryce rape a girl at a party – why not send the tape to Bryce and tell him how awful his actions were?? Also, Hannah was in the room hiding in the closet  – she could have done something and stopped it. Instead, she hid in the closet and then sent a tape to Justin (to be fair, she mentioned him a separate time on the tape so this wasn’t the only ‘reason’ involving Justin) saying the rape was partly his fault. They were both guilty of standing by and doing nothing, but wasn’t the girl who was raped hurt by this more than Hannah was? Not sure how Hannah saw herself as the victim in that scenario. Also, sending the tape to Clay just seemed mean and pointless, because he did nothing wrong. He had a crush on her, they made out at a party, Hannah pushed him away until he left, and then she was upset enough to put their ‘story’ on the tapes? I didn’t get that. As for Jenny the cheerleader, Hannah could have called the police on that one. I know she didn’t have a cell phone, but I didn’t understand why Hannah didn’t report Jenny’s actions to the police, especially after the accident. As for Bryce Walker, I think Hannah sort of mentioned that she was looking for something to happen to push her over the edge or lose herself or something – and even so, I did not understand her actions as far as this guy goes. She went over to him, she took off her clothes and got in the hot tub, she admitted on the tapes that she never pushed him away or said no…I don’t like victim blaming, but I couldn’t help but feel that Hannah expected something like this to happen when she went over to Bryce, so why put this on the tape??? I know, the whole snowball effect thing, but come on – she could have stopped or prevented some of this awful stuff from happening just by making different decisions. END OF SPOILERS.

Also, although the reader listens to Hannah’s tapes, Clay is the main character and so I didn’t really feel like I got to know Hannah much. She only revealed specific things that she wanted people to know but there was a lot that I was still curious about, like her home life and her life in her old town.

The main idea, though, was important and certainly got across: the way you treat someone matters. Rumours, lies, petty jealousies, etc. can all hurt a person. You may not even think you’ve done something that bad – or at least you tell yourself that later – but you can’t know what’s going on in someone else’s life and maybe your mean joke about that person is another bad thing to happen to him or her. It’s a good message, and certainly appropriate for high school students.

If you like YA novels, I recommend this despite my feelings about certain elements of the story, because the message is an important one, and it’s a quick read with an interesting narrative structure.