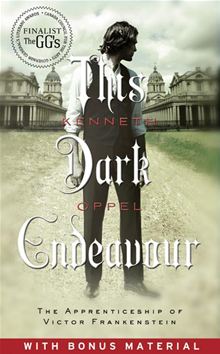 This Dark Endeavour By Kenneth Oppel

Series: The Apprenticeship of Victor Frankenstein #1

Published by Simon & Schuster Books for Young Readers on August 23, 2011

Victor and Konrad are the twin brothers Frankenstein and inseparable until Konrad falls gravely ill. In the forbidden Dark Library, Victor finds an ancient formula, and seeks an alchemist to recreate the Elixir of Life. With friends Elizabeth and Henry, he scales highest trees in the Strumwald, dives deepest lake caves, and each sacrifices a body part.

This book has been on my TBR for a while, and I bought it for a great sale price from the Kobo store.

I loved this book! It has so many great elements: mystery, historical setting, rivalry, jealousy, adventure, and great characters. Victor Frankenstein, his twin brother, and their distant cousin live in the Frankenstein chateau together with Victor’s family and the servants. Along with their friend Henry, they are all well educated and have a great bond, and indeed are the best of friends. One day, they discover a hidden room, full of mysterious and old books, known as the Dark Library.

When their father finds out where they’ve been, he forbids them from entering. However, Konrad begins to suffer from a mysterious illness that seems to threaten his life, and Victor begins to wonder if that forbidden room may hold some knowledge that can save his twin and enlists the help of Henry and Elizabeth in his mission. At the same time, he begins to look at Elizabeth differently, although her heart may belong to someone else.

Victor sets out on a dangerous path, and finds himself torn between love for his brother and jealousy. Victor’s pride and impulsiveness contrast with Konrad’s patience and kindness. While they are twins, they are very unique, and at times Victor wonders if he loves Elizabeth only because he knows that Konrad loves her as well.

I should note that I have never read Mary Shelley’s Frankenstein, although I am familiar with the general story.

I thought the characters were very well written. Elizabeth is fierce, intelligent, and bold, and I really liked her. She was no mere object for two boys to quarrel over. I also loved the conflict between Victor’s love for his brother, and his desire for the recognition and favour that he thinks Konrad receives to Victor’s own detriment. I also liked their friend Henry – he was certainly less keen on adventure than the others, but he nonetheless joins them and wants to do his part.

I thought the writing and pacing were just perfect. The story moved along quickly and went in directions that I didn’t expect, and I didn’t want to put the book down. It was such a great read and one that I am eagerly recommending. I now look forward to its sequel, Such Wicked Intent, which will be released at the end of this month.