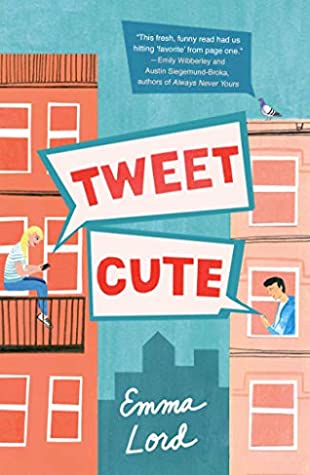 Published by Wednesday Books on January 21, 2020

Meet Pepper, swim team captain, chronic overachiever, and all-around perfectionist. Her family may be falling apart, but their massive fast-food chain is booming―mainly thanks to Pepper, who is barely managing to juggle real life while secretly running Big League Burger’s massive Twitter account.

Enter Jack, class clown and constant thorn in Pepper’s side. When he isn’t trying to duck out of his obscenely popular twin’s shadow, he’s busy working in his family’s deli. His relationship with the business that holds his future might be love/hate, but when Big League Burger steals his grandma’s iconic grilled cheese recipe, he’ll do whatever it takes to take them down, one tweet at a time.

All’s fair in love and cheese―that is, until Pepper and Jack’s spat turns into a viral Twitter war. Little do they know, while they’re publicly duking it out with snarky memes and retweet battles, they’re also falling for each other in real life―on an anonymous chat app Jack built.

As their relationship deepens and their online shenanigans escalate―people on the internet are shipping them??―their battle gets more and more personal, until even these two rivals can’t ignore they were destined for the most unexpected, awkward, all-the-feels romance that neither of them expected.

This was such a nice change of pace from my recent darker, twistier books, and was pretty much loved by everyone I know who read it.

Tweet Cute was delightful, full of banter and descriptions of food that made my mouth water while I read.

It also surprised me in that I went in with certain expectations and was pleased when the story went in a different direction at times than where I thought it would go.

If you are looking for a cute, fun, bantery romcom that will make you smile, pick this up!