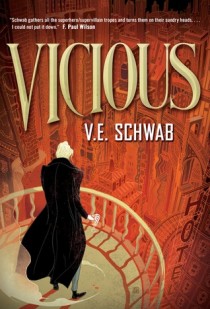 I pre-ordered this book ages ago and was so excited to receive it in my mail box a few days ahead of its actual release date.

A masterful, twisted tale of ambition, jealousy, betrayal, and superpowers, set in a near-future world.

Victor and Eli started out as college roommates—brilliant, arrogant, lonely boys who recognized the same sharpness and ambition in each other. In their senior year, a shared research interest in adrenaline, near-death experiences, and seemingly supernatural events reveals an intriguing possibility: that under the right conditions, someone could develop extraordinary abilities. But when their thesis moves from the academic to the experimental, things go horribly wrong.

Ten years later, Victor breaks out of prison, determined to catch up to his old friend (now foe), aided by a young girl whose reserved nature obscures a stunning ability. Meanwhile, Eli is on a mission to eradicate every other super-powered person that he can find—aside from his sidekick, an enigmatic woman with an unbreakable will. Armed with terrible power on both sides, driven by the memory of betrayal and loss, the archnemeses have set a course for revenge—but who will be left alive at the end?

In Vicious, V. E. Schwab brings to life a gritty comic-book-style world in vivid prose: a world where gaining superpowers doesn’t automatically lead to heroism, and a time when allegiances are called into question.

This book grabbed me right away. Victoria Schwab has written an intense, immensely fascinating and exciting story about friends who become enemies. Victor and Eli, college roommates, make an exciting discovery while working on their respective theses. What they discover is that it might be possible to make “EOs”  – ExtraOrdinary humans, people with inhuman abilities. The means by which they theorize EOs are made are risky, and when they decide to put the theory to the test to see if they can become EOs, the tension ramps up.

The structure of this novel was so effective: the chapters jump back and forth in time, initially going back 10 years, then a few months, days, hours, eventually bringing us closer and closer to the present. Not only did this allow me as the reader to learn about Victor, Eli, and the other characters who inhabit this story, but I also got to see how far apart Eli and Victor had grown. Learning what happened in the in-between parts – between their discovery and their present opposition and total readiness to kill each other – was completely absorbing.

I was absolutely fascinated with Eli and Victor’s relationship. Although they were friends, Victor always suspected that there was something dark under Eli’s surface, and there seemed to have been a sense of competition and rivalry between the two of them from the start, with Victor coming in second to Eli academically and romantically. The entire book seemed to be leading up to a final confrontation, and I was breathless as I read, waiting for the two of them to come face to face after ten years.

There is a lot to think about here, about the nature of good and evil. Eli believed that he was acting with God’s blessing, and that he had to rid the world of other EOs, who he believed were monsters, something hiding behind the face of the person they used to be. Victor does not believe in God, and does not necessarily share Eli’s opinion about EOs. I was very intrigued by the contrast between Eli and Victor’s beliefs in this regard.

The characters in this book feel so real, and in some cases my heart broke for them. I came to love Victor, Sydney, and Mitch (and Dol!), and loved that Sydney felt safe and that she belonged with Victor and Mitch. In addition to Eli and Victor’s relationship, Sydney and her older sister Serena, both EOs, have a complicated, tragic relationship that impacts the events of the story. There were so many interesting, complex characters here.

I could not put this book down. I read it in a single weekend, and was enthralled by the story, which was unique, unpredictable, and perfectly paced. I want to read this book all over again.

I don’t think I’ve accurately captured my love for this book, but this is a hands down favourite of 2013, a must-read, and I’m recommending it to absolutely everyone.