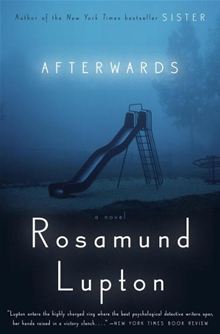 Black smoke stains a summer blue sky. A school is on fire. And one mother, Grace, sees the smoke and rush. She knows her teenage daughter Jenny is inside. She runs into the burning building to rescue her.

Afterwards Grace must find the identity of the arsonist and protect her children from the person who's still intent on destroying them. Afterwards, she must fight the limits of her physical strength and discover the limitlessness of love.

I read and loved Rosamund Lupton’s novel Sister last year, so I was very much looking forward to this one.

I really liked this book, perhaps even better than I liked Sister. The story is narrated by Grace, and it all starts with a fire at her son Adam’s school on Sports Day. Jenny, working at the school as a teaching assistant, is in the building at the nurse station. When Grace realizes this, she runs into the school to rescue her daughter.

And then…things went in what I thought was an unexpected direction, and as it isn’t mentioned in the summary above, I certainly won’t mention it here in my review!

I loved the characters in this book. Through Grace’s eyes, we see Jenny, Adam, Mike (her husband), and secondary characters such as Mike’s sister, who is a police officer, Grace’s mother, her friend, and various school personnel, among others. I really liked Grace. She was so full of love for her family, which made her overprotective on occasion, but her flaws were part of what made her feel real. When she admitted to feeling a certain way about some of the choices in her life and then showed how that’s influenced her as a wife and mother, it made me feel as though I understood her. She felt like a real person, and I cared about her.

I also loved her eight year old son, Adam. He’s shy, bookish, does well in school, anxious, and gentle. My heart went out to him constantly throughout the story. Jenny, in many ways, is the opposite of Adam. She’s brash, popular, outgoing, and more interested than being out in the world than she is in academics or worrying too much about her future. I loved the contrast between the siblings, and seeing how much they love each other despite any differences.

I was also touched by Grace and Mike’s relationship. They’ve been married for something like 19 years, and I always love to read about two people who are still in love. There were disagreements, but who wants to read about a couple that agrees on everything, never argues or disagrees? It isn’t believeable.  I’d rather read about a marriage that seems happy and real. No matter what was going on, I never doubted that Mike and Grace were in love.

As for the plot, I loved the way it unfolded, and had me constantly guessing as to the identity of the culprit. I was satisfied with the resolution, and found myself reading as fast as I could to figure out what happened.

I definitely recommend this book! It’s not as twisty as, say, Gone Girl, but it has a lot of heart, which makes for a great balance.