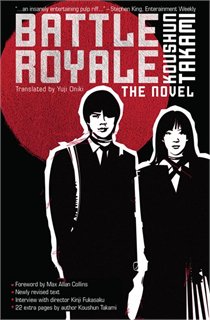 Koushun Takami's notorious high-octane thriller is based on an irresistible premise: a class of junior high school students is taken to a deserted island where, as part of a ruthless authoritarian program, they are provided arms and forced to kill one another until only one survivor is left standing. Criticized as violent exploitation when first published in Japan - where it then proceeded to become a runaway bestseller - Battle Royale is a Lord of the Flies for the 21st century, a potent allegory of what it means to be young and (barely) alive in a dog-eat-dog world. Made into a controversial hit movie of the same name, Battle Royale is already a contemporary Japanese pulp classic, now available for the first time in the English language.

I couldn’t find this as an e-book anywhere, so I had to go in to a bookstore and purchase the physical book, gasp! And this book was huge – around 600 pages!

Well, even though this book was huge, I finished it in two days. I couldn’t put it down! I heard about this book while I was reading The Hunger Games, and was immediately intrigued by its premise: a class of middle school students in an alternate Japan are taken to an island where they are forced to kill each other until only one remains. I can see why it came up in relation to The Hunger Games, but I didn’t find the reading experience to be similar (and enough about The Hunger Games – this post is just about Battle Royale).

There are 42 students in Shuya’s class (despite the number of characters in the book, Shuya is the protagonist), on the bus for a school trip (I think they were 15 and 16 years old), when suddenly Shuya notices they’ve all fallen asleep and the bus driver is wearing a gas mask. Clearly something is amiss. He wakes up with all of his classmates, in a classroom where they are told that their class has been selected for ‘the program’, which is a military research project. Each year, a class is chosen and transported to an island where they battle until only one remains. That student is declared the winner.

Shuya and his classmates learn the rules: the island is divided into grids, or zones, and at a pre-determined time, certain zones will become forbidden areas. If a student is in a forbidden area past the cut off point, the tracking collar that they each wear around their necks will detonate. If no one dies within a 24 hour period, all of their collars will detonate. If they try to remove their collars, they will detonate. Each student leaves the room at two-minute intervals, and is handed a bag on the way out containing some food, water, a map, a compass, and a weapon.

The first half of the book is really intense and action-packed, as we see how each student reacts to his or her situation. Some decide to ‘play the game’ right away, while others are certain that his/her classmates wouldn’t possibly commit murder and try to band together. It’s suspenseful because as the reader, I couldn’t be sure who would turn violent or not.

As the number of surviving students gets smaller and smaller, things got more tense for me, because I had grown attached to some of the characters and, knowing that there could only be one winner, couldn’t predict the outcome. Where Shuya was the protagonist, there were also a couple of antagonists who were ruthless, and every time they appeared in Shuya’s vicinity, I got worried for him!

I really did like Shuya. Through his memories and interactions with other students, I felt that I learned enough about him to care about him. I actually felt that I learned enough about each student to feel attached, and was sad when one died, or happy when one escaped from someone out to kill him/her, and I think that’s a pretty significant accomplishment, as there are 42 students at the start of the book.

I don’t read much non-Western fiction, and this book really opened my eyes to the world of literature that’s out there, and has me really wanting to read some more books by non-North American authors. I’m taking suggestions!

Obviously, this book is violent (definitely more violent than The Hunger Games). If the idea of teenagers viciously murdering each other does not sound like fun reading, this may not be the book for you, but if you like action, excitement, drama, and suspense, I really recommend this book. I swear,  I couldn’t put it down! Now I’m going to watch the movie adaptation!