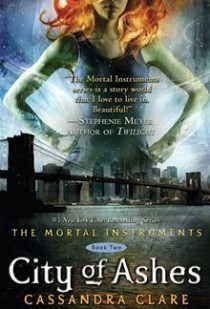 This is the sequel to City of Bones, which I read last year. SPOILER ALERT (although I think I’m the last person to read this series!).

Here is the Kobo summary:

Clary Fray just wishes that her life would go back to normal. But what’s normal when you’re a demon-slaying Shadowhunter, your mother is in a magically induced coma, and you can suddenly see Downworlders like werewolves, vampires, and faeries? If Clary left the world of the Shadowhunters behind, it would mean more time with her best friend, Simon, who’s becoming more than a friend. But the Shadowhunting world isn’t ready to let her go — especially her handsome, infuriating, newfound brother, Jace. And Clary’s only chance to help her mother is to track down rogue Shadowhunter Valentine, who is probably insane, certainly evil — and also her father.

To complicate matters, someone in New York City is murdering Downworlder children. Is Valentine behind the killings — and if he is, what is he trying to do? When the second of the Mortal Instruments, the Soul-Sword, is stolen, the terrifying Inquisitor arrives to investigate and zooms right in on Jace. How can Clary stop Valentine if Jace is willing to betray everything he believes in to help their father?

In this breathtaking sequel to City of Bones, Cassandra Clare lures her readers back into the dark grip of New York City’s Downworld, where love is never safe and power becomes the deadliest temptation.

Okay, first of all, that whole brother-sister thing? Seriously? That can’t be true, right? Jace and Clary can’t be related, can they? Because they are clearly in love with each other (even though they’re trying to fight it at the moment), and I want them to be lovahs, not relatives!

Also, poor Simon! I loved him in City of Bones, but in this book, he came across as very whiny at the beginning. To be honest, he annoyed me and I didn’t want to feel that way, because he was one of my favourite parts of the previous book. But then – I felt bad for Simon. Honestly, how many bad things can happen to a person in one book? Girlfriend in love with her brother, turned into a vampire, kidnapped and nearly killed by Valentine…sigh. Poor, poor Simon. And then he breaks up with Clary because he knows she doesn’t love him the way he loves her. Someone tell me things will turn out better for him in the next book! I want Simon to have a happy ending!

Another things that struck me in this book: Magnus is pretty awesome. Seriously, every time he showed up in a scene, I did a little fist pump. I am so looking forward to reading more about Magnus!

Now that I’ve ranted and raved about the characters, it’s time to turn to the plot. As usual, I pretty much completely forgot what happened in the previous book and had to look it up and go read my review. I still was a bit fuzzy on the Mortal Instruments and runes, but it came back to me as I read.

One of the things that really annoys me in general when I’m reading is when a character is on the verge of revealing important information, but is either interrupted or the character they’re going to reveal this information to walks away before they finish. I felt like that happened a lot in this book, and it’s frustrating because I can’t really see a reason for it. Valentine seemed like he was going to say something important to Clary but was interrupted; the Inquisitor was going to say something important to Jace on the ship but was interrupted; Clary was going to reveal her feelings to Jace at the end but he interrupted her (to apologize for not listening! I lol’d).

Clary’s ability to create runes was really cool, and I can’t wait to see where that story goes. That ability will come in handy again, I’m sure!

I loved the action scenes in this book, and the demons were so fabulously creepy. I particularly liked the scenes in the Silent City where Jace encounters the Silent Brothers under Agramon’s power, and his father visits him, because of the creep factor. I also think Valentine is an interesting villain, and was intrigued every time he appeared in the book.

The murders of the various Downworlders was an interesting plot, because different factions were pitted against others, but I think they’re all going to have to ultimately band together to fight Valentine’s master plan.

I’m definitely going to read the next book, City of Glass. I can’t wait to see what happens next!