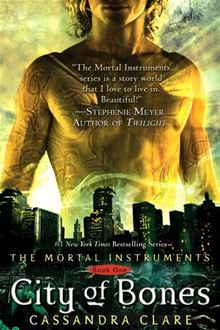 When fifteen-year-old Clary Fray heads out to the Pandemonium Club in New York City, she hardly expects to witness a murder― much less a murder committed by three teenagers covered with strange tattoos and brandishing bizarre weapons. Then the body disappears into thin air. It's hard to call the police when the murderers are invisible to everyone else and when there is nothing―not even a smear of blood―to show that a boy has died. Or was he a boy?

This is Clary's first meeting with the Shadowhunters, warriors dedicated to ridding the earth of demons. It's also her first encounter with Jace, a Shadowhunter who looks a little like an angel and acts a lot like a jerk. Within twenty-four hours Clary is pulled into Jace's world with a vengeance, when her mother disappears and Clary herself is attacked by a demon. But why would demons be interested in ordinary mundanes like Clary and her mother? And how did Clary suddenly get the Sight? The Shadowhunters would like to know...

Exotic and gritty, exhilarating and utterly gripping, Cassandra Clare's ferociously entertaining fantasy takes readers on a wild ride that they will never want to end.

This book is the first in Cassandra Clare’s Mortal Instruments series, which I’ve been wanting to read for a while.

I liked this book. Clary is an ordinary 15 year old girl, hanging out at Pandemonium, an all-ages club, with her best friend Simon. She winds up witnessing what she believes to be a murder by a trio of strangely dressed people, although the body vanishes and she quickly realizes that no one else can see the three killers.

Clary is not sure how to describe what she saw, so she does not confide in Simon or her mother about it. However, her mother begins acting strangely, and suddenly one night, Clary returns home to find her mother missing and a demon in wait.

After she is attacked by the demon, she wakes up in a strange place, where she learns that the three people she saw – Jace, Alec, and Isabelle – are called Shadowhunters, and can choose not to be seen by ‘mundies’ (short for mundanes, which is what they call regular humans). Shadowhunters are some sort of mix between human and angel, and are sworn to protect the human world from demons. Clary also learns that other creatures, such as vampires and werewolves, exist.

There is a lot of discussion about how and why Clary has the Sight (the ability to see the Shadowhunters, demons, etc.), who has taken her mother, where she might be, etc. There is also a love triangle between Jace, Clary, and Simon – I know who I’m rooting for, but I won’t spoil the plot.

I liked that Clary and Simon seemed like real people. They were funny and sarcastic, and I believed in their friendship and that they’d known each other nearly their entire lives. As for the Shadowhunters, I thought that Jace’s character was fairly well developed throughout the book, but that the others (Hodge, Alec, and Isabelle) were a bit less developed: Alec was Jace’s sidekick, Isabelle was the beautiful but bitchy female of the group, and Hodge was the wise, bookish, older advisor. However, I can make allowances for that since it is the first book in a series and I expect much more character development in subsequent books.

There were a number of secondary characters, such as Magnus Bane (a warlock), Luke (a friend of Clary’s mother), and others that Clary encounters throughout the novel, and I liked the way the author found a way to include them in the book’s plot – it didn’t just feel like they were included for no real reason.

There were a lot of twists and turns and Big Secrets revealed in this book, and while some of it was predictable, it was still fun to read. I really liked the world building in this book (the glamours, the Silent Brothers, the history of the Clave, etc.), and I want to keep reading the series – the next book is City of Ashes and I have already added that to my TBR list.